Scandinavia end to end with Townsend

By Jörgen Johansson July 03, 2010
Backpacking legend Chris Townsend knows more about  hiking in Scandinavia than most Scandinavians. Almost twenty years ago he followed the spine (or The Keel, as it is often called here) of the peninsula that is Norway and Sweden, from the southern end to the northern end. When I mentioned this to the Nordic Lightpackers on our hike in Vålådalen recently, this created some interest. So I asked Chris a bit more about this walk of his. 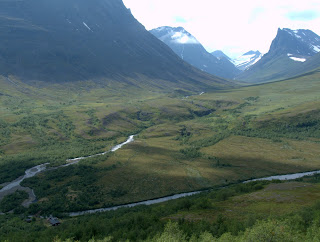 Jörgen: Chris, few people know that you have walked the entire length of the Scandinavian mountain range in Norway and Sweden in the early 90's. You told me a long time ago that interest was low at the time and that it only resulted in one newspaper article. Could you tell us a bit about that? Where did you start and where did you end? How long was the walk and how long did it take?
Chris: The walk was 2200 kilometres long and took from June 24th to September 17th. I started at Lindesnes and finished at Nordkjosbotn. More in detail; Setesdal-Hardangervidda-Jotunheimen-Rondane-Sylarna-Borgefjell-Kungsleden-Troms Border Trail.
Jörgen: I remember you telling me that it was one of your wetter walks. This says something considering that you are a Brit :-)
Chris: The walk started with warm sunny weather. However the weather changed when I reached the Hardangervidda and it then stayed wet and windy through most of the rest of the walk with only a few days of sunshine here and there. Many of my journal entries start "woken by heavy rain!". Of course it didn't rain all day every day and there were days with a mixture of sunshine and showers. 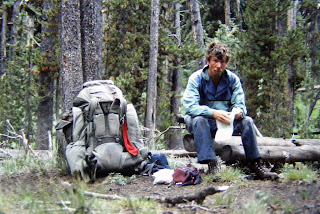 "This is from the Continental Divide Trail that shows the size of pack - 100 litres - and type of polycotton clothing I wore in the 80s and early 90s." Photo: Chris Townsend
Jörgen: A couple of years ago I walked part of that route, southwards from Hemavan into Jämtland, on the Swedish side of the border. This is a land of few trails and few tourists in summer. Which route did you pick through this area?
Chris: I went from the south along the route Storlien-Sandvika-Skjaekervatnet-Gaudalen-Fjellgard-Lakavatnet-Gaddede-Vaktardalen-Slipstikstugan-Jovattsan-Hemavan.This took me three weeks and it rained most days. There was some bushwhacking, some cross-country and some rough trails. It was certainly the toughest part of the walk.
Jörgen: This walk was undertaken almost 20 years ago. At that time the gear you used was not as light as the stuff you are using today. Would the lighter gear you use to day have been better or less good? In what way? 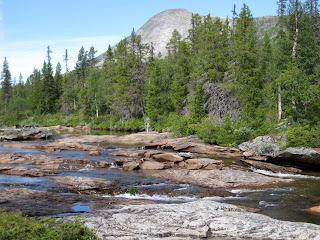 Chris: Some of the lighter gear I use today would have been fine for the walk. Some might not have been durable enough. I did keep a gear list with weights so I can make direct comparisons.
Today I'd take a lighter weight thin fleece and a lighter synthetic insulated top. Overall I reckon my base weight would be around half what it was in 1992. Jörgen: If you compare lightweight and ultra light backpacking as it is undertaken in the US with the situation for northern Europé (where your Scottish homeground would be included), what are the main differences?
Chris: I think the main differences between lightweight and ultralight backpacking in the US and Northern Europe are to do with shelter and forests. Most US backpacking takes place in forests and on well-maintained trails. Much Northern European backpacking takes place above the trees on sketchy paths. This means that less protective shelters and clothing are fine in the USA but need more skill and more adaptability in Europe. I used a tarp on my last two long distance hikes in the USA (and didn't even use it most nights) but I would still choose a tent for Scotland or Scandinavia. I've used tarps in the Highlands on one and two night trips but for anything longer I want a more storm resistant and easier to pitch shelter.


Jörgen: If you weigh the pros and cons for tarps versus light tents and add bivies that protect against precipitation and/or bugs, I see minimal weight differences today.
Chris: Certainly once you combine a tarp with a bug tent or a bivi bag the weight difference with the lightest tents is minimal or non-existent. I also view tarps as giving freedom and space. If I have to use a bug tent or bivi bag as well then I'd rather have a tent, as that then gives more freedom and space. I'm taking a GoLite Shangri-La 1 with the Nest inner on the Pacific Northwest Trail. This gives me a stormproof tent for high camps, a bugproof tent for the mosquitoes and a flysheet that I can pitch well above the ground so it's more like a tarp. The Nest inner will double as a groundsheet when the netting isn't needed.
Jörgen: Thank you Chris, and have a nice walk along the Pacific Northwest Trail!

PS. Chris did not have any digitalized photos from his walk, so I have supplemented with my own photos from the general areas that he travelled through. In Sweden I should add. I am also under considerable pressure from the Swedish and Norwegian Tourist Authorities to emphasize that it does not rain all the time. Of course, I do not give in to pressure like that but will stand steadfast as a pillar of truth for my readers...

Comments in English below and in Swedish at Utsidan.se here.
Jörgen Johansson
I have been hiking since my early teens, mostly solo. Right after the millenium I discovered ultra light backpacking and have been using, trying and adapting originally American techniques to Scandinavian tundra. The demands in that area are demanding and equal to the ones I have found in northern Alaska. About this I have written in a number of books. In Swedish the bestselling Vandra Fjäderlätt, in English the Smarter Backpacking series that you find on Amazon.