By Jörgen Johansson February 16, 2016
One of my absolute favorites for transporting gear and food when travelling in snow, is the Rulk. It derives its name from a combination of rucksack and pulk. It has the advantage of working (almost) equally well in both modes. 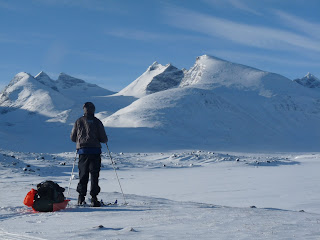 The story of my creation of and first winter trip with my rulk, along the Inland Rail of northern Sweden is told here.

This trip and the Rulk also generated an article describing the construction in detail in Backpackinglight.com that can be read here.

The revised version was a cut-off Paris pulk made from plastic that has since been used in Sarek and on Finnmarksvidda. The thoughts behind and construction can be scrutinized here.

On Finnmarksvidda I travelled with Joe Newton and we both used Rulks. Through no fault of Joe's we had to climb a steep slope in a ravine, sometimes dragging, sometimes pushing and sometimes carrying our contraptions. Luckily we had just finished this entertaining traverse when a storm hit. If you want to read more about this outing take a look here.