Double up or not?

By Jörgen Johansson February 18, 2016
It is usually a good idea to save weight by sharing gear with a team mate. But not always. On our Finnmarksvidda trip a couple of years ago, Joe Newton and I did not share any gear, simply because with light gear the advantage is not so great. Or maybe just the opposite. It might be safer not to share gear. These are the pros and cons as far as we could see. 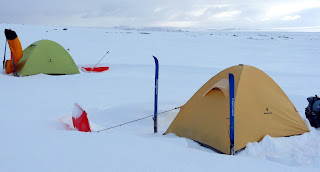 On this winter trip we brought:
Considering that our two tents only weigh about 2,5 kilos together, it is not easy to find one good winter tent that weighs less. A Hilleberg Nallo would, but we did not own such a tent. The Nallo is also too short for my 190 centimeters. My old Hilleberg 3-person Keron with plenty of space and bombproof  to booth, weighs over four kilos. And of course, with two tents we had one spare, we could have survived in one tent. 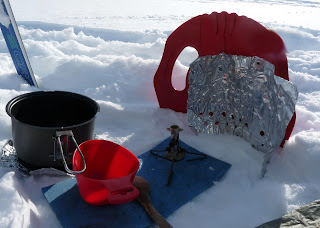 We could maybe have saved a couple of hundred grams by skipping one stove and using a larger pot. However, this would have made melting snow and eating more complicated, since we had most of our meals in our respective tents.

We both used top mounted canister stoves that are not considered winter stoves but work fine down to at least -20 C. Bringing two stoves, each weighing less than 100 grams, could be considered a safety measure.

We could have put all our gear in one big Paris pulk, instead of having two sawn off into Rulks, and taken turns pulling it. But that would have completely ruined the whole rulk concept.  It would have been impossible to carry this big pulk on our backs.

The two rulks could, in an emergency, pretty easily have been turned into one long pulk unit in which Joe could have pulled me to the nearest hospital. I have holes drilled near the tops of my skis to make it easier to turn the skis into an emergency sled. Coupled with the pulks this would have been a very good emergency vehicle. 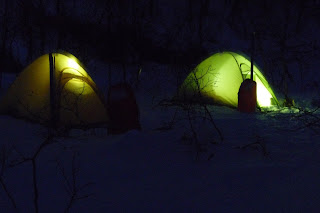 As for our true emergency gear (repair, medical, firestarters etc) it only weighs about 100 gram for each of us. So in total there was little to be gained from combining that stuff. It can even be argued that there is safety in both of us having all the gear we needed, should we for some reason, like whiteout, become separated. That can in fact happen, and it almost happened to me years ago, that I lost sight of my team mate in hard wind and swirling snow.

More about the Finnmarksvidda trip here. You can also search www.fjaderlatt.se with that keyword.
Jörgen Johansson
I have been hiking since my early teens, mostly solo. Right after the millenium I discovered ultra light backpacking and have been using, trying and adapting originally American techniques to Scandinavian tundra. The demands in that area are demanding and equal to the ones I have found in northern Alaska. About this I have written in a number of books. In Swedish the bestselling Vandra Fjäderlätt, in English the Smarter Backpacking series that you find on Amazon.