By Jörgen Johansson July 02, 2012
Worked a lot with sewing and planning this last weekend. I am happy to say that the revamped version of my 'JJ Cuben Tent' is now ready to launch. Some reader might remember its 166 gram predecessor from my Virihaure trip two summer ago. It worked reasonably well but broke in crucial places. Time to rebound. 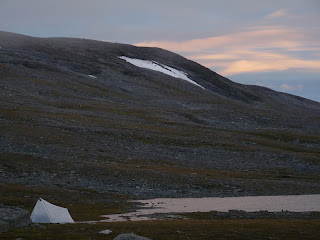 A more complete story of the 2010 version is found here. Below and above is what the tent looked like on the first night in the mountains then. 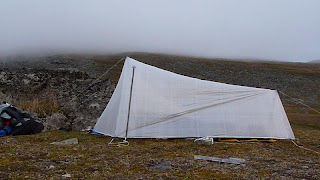 As can be mistily seen through the cuben fiber canopy there is also a bug bivy/inner tent, where a sitting persons torso is encased in a triangular 'room' made from a combination óf noseum netting and of thin ripstop close to the ground, for wind protection in supine position. This ended around the hips and I have now added a bivy bag part for the lower body as well, which gives added protection and warmth. The weight of the inner tent is now 210 grams. 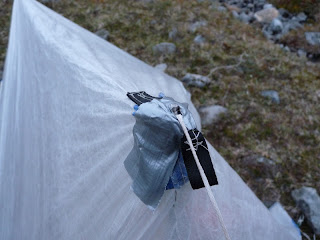 The biggest problem with the fly was that some sloppy sewing/reinforcement on my part made the grommet around the tent pole rip out. Not so good. Fortunately the weather was cold but without any high winds. That is not to say that there was no wind during my hike. 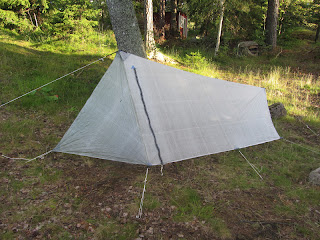 Here is the new version pitched in my garden. The major differences are; considerable reinforcments where the poles protrude, fore and aft, plus expansion of the front end. I have increased the size of the 'foretent' part sticking out at the front end quite a bit. This brings it closer to the shape of the tent I modelled it from, giving more interior space.

More interiour space was not really necessary, but I also think that the angle of the fabric will shed hard winds better than the earlier version. The shape is pretty much identical to the Golite Shangri-la 1 and this is a tent shape that is very storm worthy. In its original incarnation, a Fjällräven G66 bought in 1970, it has withstood a number of winter storms way back when. Final weight 210 grams including lines but not poles and pegs. The weight of the original 1970 fly, light at the time, was 800 grams.

So what I hope to have now is a very storm worthy tent weighing 420 grams. In high winds pitched close to the ground (more or less like in the photo above) in benign weather with the help of the extendable hiking poles it can be pitched a foot off the ground. This makes for execellent circulation and little condensation in nice weather.

We'll see.
Do it yourself Gear reviews Shelters Trips
Jörgen Johansson
I have been hiking since my early teens, mostly solo. Right after the millenium I discovered ultra light backpacking and have been using, trying and adapting originally American techniques to Scandinavian tundra. The demands in that area are demanding and equal to the ones I have found in northern Alaska. About this I have written in a number of books. In Swedish the bestselling Vandra Fjäderlätt, in English the Smarter Backpacking series that you find on Amazon.