West of Virihaure - the shelter

By Jörgen Johansson September 14, 2010
During my hike north and west of the Virihaure I used a brand new shelter. A homemade combination of innertent/bugtent and rain fly. Cuben fiber was the main ingredient and the weight was astonishingly low.  So, how did I make it and how did it work? 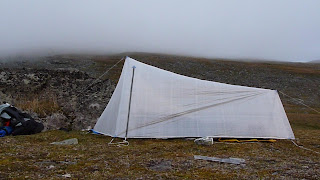 The construction was simple, I have used it before in a silnylon shelter that I made in 2004. It became my shelter for a 500 kilometer three week hike from Hemavan to Nikkaluokta, through some of the most spectacular parts of the Swedish mountain range.

Since then I have used a number of commercial shelters, but actually none that I have felt as confident about in really windy weather.
The shelter is basically a ridge tent employing two poles, one at each end and one longer than the other. It is a variant of my very first tent bought in 1970, a Fjällräven G66.
This tent-model is till used in the Golite Shangrila 1. I have wintered snowstorms in the original model from Fjällräven, not to mention numerous other instances of rough weather in many places so I know that the construction is very storm proof, providing the material stands up.

So it has been growing on me to see how light a tent like this I could make. And given the positive experiences many others have had with Cuben fiber this seemed the place to go. Calculations showed a tent like what I had in mind could be pretty light...

Said and done; I read up a bit and found that some sources advocated both taping, gluing and sewing for joining pieces of Cuben. Sometimes all three at the same time. The nearest source of Cuben was http://www.extremtextil.de/ and they also had a tape for the material. It also turned out they had Cuben that was "light olive-brown" which really sounded nice compared to the usual Gladpak. Unfortunately they were just 0,4 meters short of what I needed when I ordered, so I resigned to being "the man from Glad". Seing no reason for anthing else I ordered the lightest Cuben they had at 21 grams/sqm, which was pretty close to half the weight of the silnylon I had used in 2004.﻿
While practising working with Cuben I made a pair of rain pants for my son, which I have written about elsewhere. I found out that it was fairly easy to work with the tape. You take sections of 200-300 mm or you will just end up in a tangle like Donald Duck. That is really all there is to it. The impression of the tape is that it really bonds securely and it showed no tendency of failing anywhere on the first trip.

Cutting the Cuben with my regular silnylon cutting method (soldering iron and a steel ruler on the stainless kitchen bench) turned out to work very well. I was also impressed by the resiliency and apparent strenght of the Cuben. It gives the impression of being even more durable than silnylon which gave me renewed confidence in the shelter I was building.

I had planned to both sew and tape the seams, but sewing through the gluey mess of the tape proved difficult. The needle got all covered in sticky film and the stitching was failing. Since the seams felt very solid only taped I just sewed the seams in some places where the strain would be greatest, i.e the tops where the poles went through and around the perimeter of the reinforcement patches. The bottom seam around the lower perimeter of the tent was just that; a seam. I just folded it and sewed. That was all very easy. More tedious was cutting small pieces of tape to cover the triangles of ripstop nylon I used at stress points to reinforce. In retrospect maybe sturdier Cuben would have been better for this and glue would have been faster.

Some details:
﻿
To sum it all up my shelter worked reasonably well. Obiviously I will have to look at another way of attaching poles and lines. I am thinking of some sort of cross-grain 'harness' on the inside. Next season...

I had not succeded in measuring all the parts well, which made it a bit difficult to get good tension all over the fabric when pitching. This was mostly due to some brain-failure on my part which made the tent end up a bit smaller than planned. Especially the high end triangular space that passes as fore-tent. I also had some problems with the ridge line, which took a bit of fiddling to keep it from sagging, which usually is not a problem with the tarptents I have made. I'll have to see what I can do about that. The innertent needs a few centimeters extra cloth at the lower end, it was a bit tight around my butt when laying on the side.

Conclusion: A very feasible and light tarptent solution that in competent hands would have been very wind-resistant as well. I just hope someone reading this will make one lacking the aforementioned weaknesses and then go find some nice and really hard winds. Send me a Youtube-link of what ensues.

You are all wondering about the weights. Well the tarptent/fly weighs 165 grams and the bug-tent weighs 160 grams. To this I added 110 grams of tent pegs. I use a mixture of 10-12 gram 'regular pegs and 6-7 gram titanium. Twelve pegs in all plus two 1-2 gram Terra Novas for the upper corners of the bug-tent.

A simple sketch of the tent, with measurements can be found here.
Comments in Swedish on the Utsidan Do-it-yourself forum here.
Comments in English below.
Gear reviews
Jörgen Johansson
I have been hiking since my early teens, mostly solo. Right after the millenium I discovered ultra light backpacking and have been using, trying and adapting originally American techniques to Scandinavian tundra. The demands in that area are demanding and equal to the ones I have found in northern Alaska. About this I have written in a number of books. In Swedish the bestselling Vandra Fjäderlätt, in English the Smarter Backpacking series that you find on Amazon.