By Jörgen Johansson August 22, 2011
After some 50 kilometers of bushwhacking I was afloat on the Nahanni. Another 50 kilometers waited, the (in)famous Rock Gardens. This is described as "almost continous whitewater" and "not the place to learn whitewater skills". The more serious rapids rate from II to III and III++ and have fanciful names like Hollywood, Danish Dynamite, Bailing Rapids and The Sequel. Being a coward by birth and habit, and not a very experienced packrafter, I had already decided that I would probably portage all of the more difficult rapids. 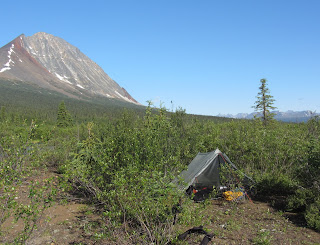 The Moose Ponds were behind me after a couple of chilly hours, dressed only in rainjacket and thin pants since it was pretty hot when I started paddling. Since the shore was boggy and shrubby (is that a word?) I took the first possible campsite at 7 pm, dead beat. I put the tent up on a gravel bed with Mt Wilson for backdrop and was cooking my noodles when I heard some splashing of an animal crossing the river. It was a caribou, which rapidly disappeared when I went for my camera. 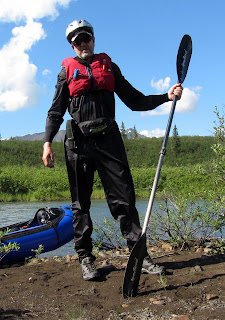 The first morning on the Nahanni was glorious. The sun shining, no more bushwhacking. I leisurely packed my stuff and prepared for the whitewater. It was also a morning of trepidation; would I manage?

The photo shows the welldressed packrafter; drysuit, helmet, sunglasses, inflatable PFD, whistle, knife to cut myself loose in an emergency and bear spray on the hip, ready for a fast draw. Time to go. 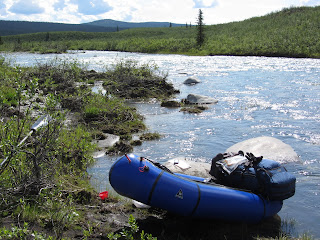 It started out nicely enough, with a few swifts that sped up the journey. The Moose Ponds are more or less at timberline and my friends the shrubs were almost all that lined the shores as I drifted downstream in the sunshine. This was the way to travel. 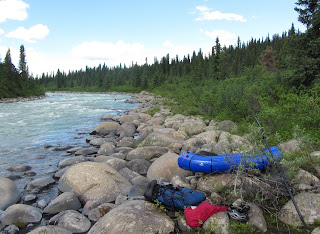 As I knew well from the river guides things soon started to speed up as we descended into forest. Pretty soon I was very glad for the packrafting experience I had and the practice run along Voxnan this spring. Reflexes seemed to be working and the packraft was responding nicely. 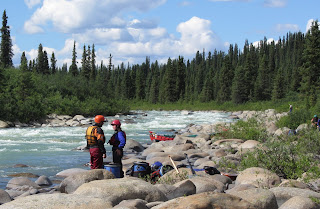 Then things began to get very serious indeed. I also ran into some other parties that were canoeing. This was group from Whitehorse with four canoes. One group lined, one portaged, one got soaked and one shot this rapid. I portaged together with a couple of canoists; the guy being the owner of a couple of packrafts himself. He looked at all the gear he and his partner would have to portage and then at me, simply strapping the deflated packraft to my pack and heaving it onto my back. He jokingly kow-towed to me and said: "River ninja, very fast, very silent". 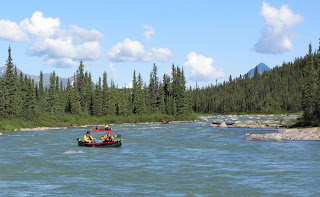 It took more than a week before I saw the Whitehorse group again at Virginia Falls, but another group hove into sight that I would run into off and on for almost half my journey. Three canoes, many occupants in yellow and an unmistakable British accent made me label them 'the Limeys'. A couple of grizzled gents of late middle years (something that has also been said of yours truly) turned out to be the head honchos of the British Open Canoe Association and the rest was a bunch of younger, certified instructurs. 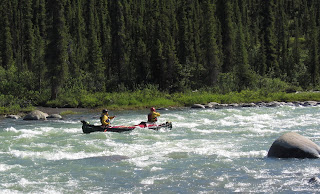 Mark Gittoes and Dan Spry as front end motor took this rather uncomplicated whitewater in their stride. In fact it was not even particulary taxing even for an amateur like me. 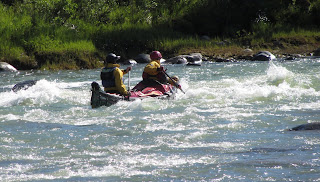 As could be expected this expert group went straight through the entire Rock Gardens without a single swim, albeit with some passes being done backwards, from what I heard later. They even claimed that the only rapids they had difficulties in where the ones they scouted. 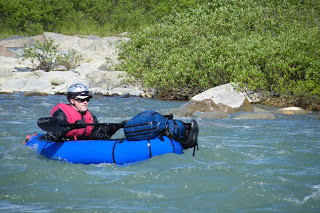 With a packraft you are of course riding lower in the water than in a canoe. Photo by Mark Gittoes.

Whitewater certainly can be fun, and needs a lot more focus than just drifting... Photo by Daniel Spry. 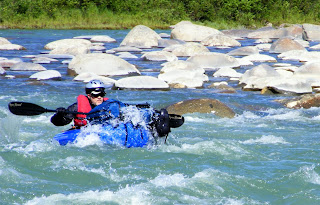 This photo shows why the pack usually is soaked, as well as the fact that the way down very often also is through. Photo by Daniel Spry. 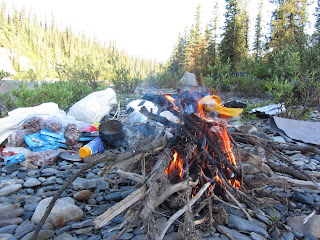 The nights in the Rock Gardens, still being at a fairly high elevation, were chilly and damp along the river. One morning I got tired of waiting for the sun shining on the other bank to work itself over to where I was, and lit a small fire. Fires are not allowed in the national park unless you have a fire box or fire pan, but this was still outside the park (so don't report me). 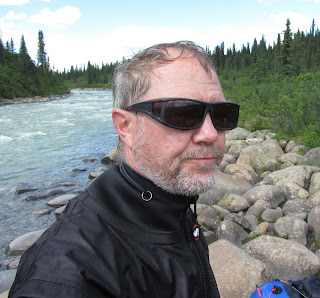 My plans to portage anything that looked serious seemed a good idea. The problem were the less serious looking rapids that became more serious under way and that I almost, but not quite,managed to run. During these 2-3 days in the Rock Gardens I took three involuntary swims. The force of the water grabbing me when I was up-ended was terrifying. This was a big, forceful river, even if it was still in its teens.

On all three occasions I did everything by the book; held on to my paddle, held on to the raft and kept my feet and legs, mostly, out of harms way. Flushed across rocks and into sucking holes my knees got a couple of knocks, but I got out of it all by climbing halfway up on the packraft floating upside down. When the current slowed down I managed to kick my way into an eddy and get up on the shore. My expression in the photo above sums up the feelings after one of these occurences pretty well.

The third swim did hit me on a different level than the first two. I do not know if the swim was longer or the current faster or the rocks harder or the holes deeper. Even if you have trained self rescue as well as swamped IRL before, as I have, and your mind knows this, your body is certainly fighting for its life when it happens, the adrenalin is pumping and you loose track of things not essential for basic survival.

But after the third swim it did hit me emotionally with full force: This cannot continue; you can die here.

And suddenly I knew; I do not want to fall out of a packraft into a cold, viscious river ever again. There is an expression for this kind of experience:
Loosing your nerve. 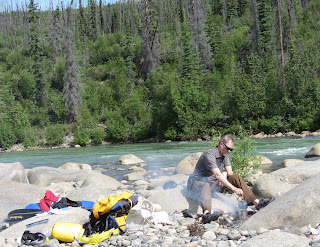 It took me a long time to regain part of my nerve. However, this meant that the last rapids in the Rock Gardens; the Hollywood and the Sequel (both III++) and Graduation Rapids (II+) were rapids that I portaged. In the photo above I am having lunch on an island in the middle of Hollywood. A sheer cliff on my portage side forced me to ford the narrow channel. After a nice lunch in baking sun I then ferried across the wider channel seen behind me, with one whitewater stretch starting just downstream. 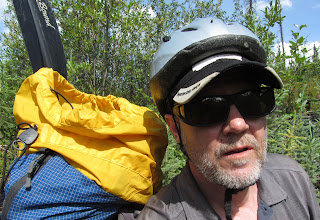 Suddenly I was back to bushwhacking again, cutting across some promontories when walking at the very edge of the river proved too difficult or impossible. And, believe it or not, I was happy to be walking. 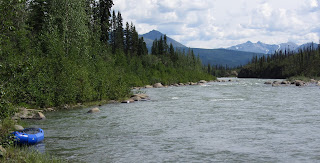 The Rock Gardens ended rather distinctly and I could inflate the packraft and start to go with the flow again, with a minimum of whitewater to be expected until Virginia Falls almost 300 kilometers downstream. Another phase of my trip down the Nahanni was about to begin.
Jörgen Johansson
I have been hiking since my early teens, mostly solo. Right after the millenium I discovered ultra light backpacking and have been using, trying and adapting originally American techniques to Scandinavian tundra. The demands in that area are demanding and equal to the ones I have found in northern Alaska. About this I have written in a number of books. In Swedish the bestselling Vandra Fjäderlätt, in English the Smarter Backpacking series that you find on Amazon.