By Jörgen Johansson March 20, 2011
Right now the planning of mine and Joe Newton's trip across Finnmarksvidda is looming big. Only a couple of days before we leave for this giant, wide-open expanse at the top of the European continent. We hope to cross a large part of it during six days of skiing and rulking. 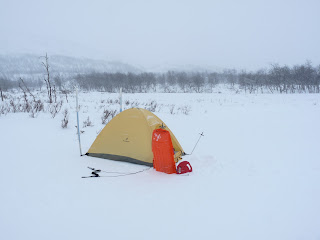 Check out what my skiing partner Joe Newton has written about the plans for Finnmarksvidda here. I am really happy about him fixing us up with a SPOT tracker as well, I have been planning to familiarize myself with that kind of gadgets for a long time. Nice to have some sort of life line even if the statistics say we won't need it. After all, more people get hurt on their way driving to their backpacking destinations than from the actual hiking. Also, I think it will be a comfort for my family to know more of how things are going.

Finnmarksvidda is Norway's largest plateau. Not known for it's impressive peaks at all. The area is in fact undulating between 300-500 meters above sea level. But it is big; 22 000 square kilometers, or about the size of Israel, slightly bigger than Wales or slightly smaller than Belgium depending on your references. 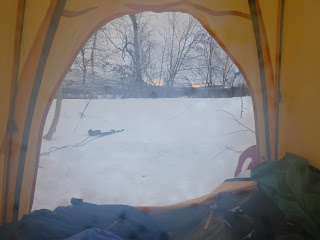 There are roughly four towns connected with roads. At sea level there is Alta and Lakselv, and bordering the Finnish taiga is Karasjoki. Up on the tundra is 'the capital of the Sami people' which is Kautokeino. So, few roads and not many people and the coldest weather in Norway. Sihcajavri, close to Kautokeino, has an average yearly temperature of -3 Centigrade. This is colder than the Norwegian artic islands of Jan Mayen or Bear Island.
Can anyone blame us for being unable to stay away?
Joe and I will be leaving Alta after a hearty last lunch on Tuesday March 22. We plan to arrive in Kautokeino no later than Monday March 28 and take the bus back in time for our flight south on March 29.  We will be travelling west of route 93, where there is a huge area with no roads and not many trails. The route finding will no doubt be a challenge in this landscape that is not studded with easily identified mountains and valleys.
My gear will be more or less what served me so well in Sarek last year with a few minor changes. Like my ski bag, or whatever you call those longish things necessary when flying with your skis. I put one together the other night from some scraps of cuben fiber and silnylon. Beautiful? Not really, but light. 42 grams. I am pretty satisfied with that.
Jörgen Johansson
I have been hiking since my early teens, mostly solo. Right after the millenium I discovered ultra light backpacking and have been using, trying and adapting originally American techniques to Scandinavian tundra. The demands in that area are demanding and equal to the ones I have found in northern Alaska. About this I have written in a number of books. In Swedish the bestselling Vandra Fjäderlätt, in English the Smarter Backpacking series that you find on Amazon.