West of Virihaure - the gear

By Jörgen Johansson September 28, 2010
Here is a list of the gear I brought with me to Virihaure and some comments. It was basically the same gear that I have been using for the last year or so. 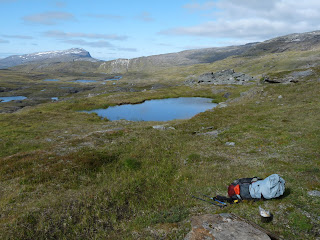 It was a 6-day trip that turned out to be colder than what I had reason to expect. So the gear was working at the limits of its capacity. I slept in everthing I had including rain pants (but not rain jacket) a couple of nights, but that meant I was not particulary cold at night. I hiked in my rain gear for 3-4 days even if it did not rain, in order to stay warm. There was no frost at night but around 4-5 C and an insistent wind day and night. So I was never in any danger and not even freezing, just close to being uncomfortable a lot of the time. Bottom line: The gear worked well and kept me in good working order.

One important and impressive piece of gear was the 58 liter Gossamer Gear Mariposa Plus that I had only used before on the Vålådalen hike with members of Nordic Lightpacking in May. For that trip the pack was way too big and had no chance to really give much of an impression, except that it worked for a three day trip. This time with the packraft taking up volume and starting with 16 kilos on my back it was an exact replica gearwise an weightwise of last years packrafting endeavour between Abisko and Nikkaluokta.

﻿
For the Abisko-Nikka trip I used the ULA Ohm which I later reviewed and was satisfied with as a good compromise for the person who wanted a light pack and still needed some sort of frame within. Both Ohm and Mariposa Plus weigh between 650-700 grams and reputedly hold around 58 liters. And both have a frame of sorts. I cannot honestly say that I would need more of a frame ever.

I found the Mariposa lots better for me than I found the Ohm. It is bigger inside (according to BPL and Roger Caffins articles ULA liters seem smaller than most due to the fact that they include the pocket volume) and fits more comfortably on my back, with the waistbelt a better fit around my hips. What I find not so good on the Mariposa is the elastics used to compress the main bag. I find them a nuisance that block side and back pockets when you need to start compressing after a couple of days. Ohm has a similar system but no pockets are blocked (since there are no pockets where the compression cord is). The Mariposa abundance of net pockets do suit my way of packing very well though, which makes them an improvement over Ohm, but alas, when you compress.... Oh well, there probably is no way around this, you cannot have black light. Comparatively the Mariposa fabric gives a weaker impression (true or false) than that of the Ohm and the general impression of 'finish' goes to the Ohm. All in all I prefer the Mariposa.

New for this summer as well was the Marmot Trail Wind Hoody as well as the Marmot Essence 2010 (there are older version that are heavier) rain jacket and pants. The windshirt performed a lot better than my old Marmot Ion windshirt. The cut is much better for one thing (the Ion must have been designed for couch potatoes like Homer Simpson and not for tall and thin galoots like yours truly...). The new hood is excellent and the overall weight of the Trail Wind Hoody as well. I prefer a windshirt with a hood, since the few extra grams mean a lot of warmth in my windy mountains.

The rain gear from Marmot worked very well also. They have kept rain out all summer (there was no rain for more than five minutes on the Virihaure trip) and I walked in them for several days without having any trouble with condensation. I usually try to avoid putting on my rain jacket for as long as I possibly can, which is pretty long since I carry an umbrella.
I am really pleased with the Marmot Essence rain suit so far. And I have also for several years been favorably impressed by Marmots pricing here in Sweden. Their Ion windshirt was for a long time about half the price of windshirts from comparable brands.

The MSR Titan Tea Kettle also worked very well. Expensive though. Using the light plastic bowl for lid and for eating out of as well also was a good solution.

As you can see from the complete table of gear below (I am trusting everyone to be as nerdy as I am) I brough two pair of shoes. I have used Salmon Tech Amphibians in different reincarnations for many years now and they fit my style of hiking perfectly. I get along fine without very supportive and stiff shoes and need something flexible enough in the size department to handle everything from barefoot to pile socks underneath waterproof Goretex socks. But this time I also brough a pair of even-closer-to-barefoot shoes; Vivo Barefoot Evo Running Shoes.

I had used the Evos on day hikes in the mountains earlier in the summer and had been favourably impressed. I am definetely not a barefoot fan from way back when, and was not very keen when Martin pressed a pair into my hands (or onto my feet). But they where an awful lot more comfortable on the trail than I ever expected. With a heavier load, like here by Virihaure, they worked just as well. There was one problem with them, that I suspect had to do with them being new. One of them started pressing painfully on my Achilles tendon, so after three days they went into the pack. I had only used them for about 2-3 hours every morning in order not to overdo things far away from civilization. We'll write more about the barefoot revolution later. For the moment I can only say that my 17-year old son has hijacked the Evos...

Finally, the BPL Thorofare pants has gone through the mill this summer and proven themselves worthy. They are very thin but windproof and with a bit of stretch. The leg pocket is a good place to keep your money when you are in civilized surroundings. They have so far not shown any holes in spite of some bushwhacking. They dry out extremely fast after fords; I can seriously say in a couple of minutes. With the DWR it is almost as if they do not get wet. We'll see what happens after they have been laundered some more.

Gear reviews
Jörgen Johansson
I have been hiking since my early teens, mostly solo. Right after the millenium I discovered ultra light backpacking and have been using, trying and adapting originally American techniques to Scandinavian tundra. The demands in that area are demanding and equal to the ones I have found in northern Alaska. About this I have written in a number of books. In Swedish the bestselling Vandra Fjäderlätt, in English the Smarter Backpacking series that you find on Amazon.