By Jörgen Johansson June 07, 2016
Another piece of gear new to me, and also a test for Backpackinglight.com, was the inflatable mattress from Exped, a Synmat Hyperlite M, that I used during Coast2Coast Sweden this year. 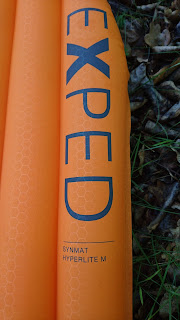 The Synmat Hyperlite M weighs 370 grams and is (almost) full length. Full length for most people no doubt, since it is 1,8 m long (almost because I am 1,9 m). It is 7 cm thick, fully inflated and 52 cm wide at shoulder level, but tapers towards the feet, where it is about 37 cm wide. It has a synthetic insulation inside, like all Exped Synmats, as opposed to the Exped Downmats which of course has down as insulation.

Since my Thermarest NeoAirxL Short got left behind in Alaska last summer I have been looking for a replacement. The Synmat Hyperlite M is heavier (the NeoAir weighed 230 grams) but also longer (the short NeoAir is 120 cm long). 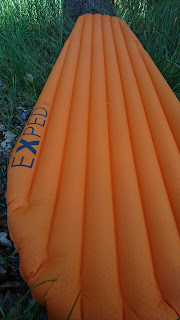 My impression of the Hyperlite M during the fortnight on Coast2Coast Sweden is favorable. I alwas bring a foam pad which I use during the day and underneath the inflatable during the night. This adds quite a bit of insulation but the Synmat felt comfortably warm even during some nights of frost or near frost. It is supposedly good on its own down to -7C, so this was not really a test, just something I noticed.

You inflate the pad with your mouth or with some of several pump bags sold by Exped. Being a cheapskate I used my mouth on some occassions and borrowed pump bags from other Coast2Coasties on other.

The Synmat Hyperlite is certainly comfortable to sleep on and I have only one question mark. I felt that I was sliding downwards on it a lot (the sleeping area is seldom completely level and I keep my feet at the lower end). Sliding more than I am used to at night. However, this could be because of the slipperiness of my sleeping bag fabric (I used a Haglöfs LIM Down, see separate article on this).

I will continue testing this pad during the summer and fall, using other sleeping bags as well, and a full review of the Synmat Hyperlite M will appear in Backpackinglight.com, as mentioned.
Gear reviews
Jörgen Johansson
I have been hiking since my early teens, mostly solo. Right after the millenium I discovered ultra light backpacking and have been using, trying and adapting originally American techniques to Scandinavian tundra. The demands in that area are demanding and equal to the ones I have found in northern Alaska. About this I have written in a number of books. In Swedish the bestselling Vandra Fjäderlätt, in English the Smarter Backpacking series that you find on Amazon.