By Jörgen Johansson May 26, 2016
The second piece of gear used on Coast2Coast Sweden in 2016 that I would like to comment on is my homemade tent. It had some good sides and some bad sides. The goal was to have a dry and comfortable sleeping area during circumstances that were prime for creating condensation in a shelter. Did I succeed? 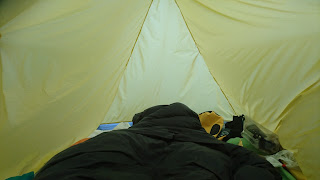 The story behind the shelter, with focus on the inner tent (I already had a Cuben fiber tarp), and how it was made is told in detail here, so I will not repeat that. So what can I say after some 10+ nights in my new shelter?

Well, the inner tent it is very spacious for one person. It was actually designed to have room for two people in a pinch. In spite of this it only weighs 310 grams, which is nice. 520 grams in total with the tarp/rain fly, which made it one of the lightest shelters on C2C. Some of the lighter shelters were not bug proof.

I am happy to say it worked according to plan. We had some cold nights initially, the coldest being -1,5 C and that was sleeping close to a lake. There is no way to avoid condensation during circumstances like that. My rain fly was damp/wet and the outside of the innertent also slightly damp. Inside, however is was perfectly snug and dry and out of the wind. This kept my sleeping bag dry and the insulation was not compromised, so my night was chilly but I did not freeze. Of course, I wore all my clothes except the rain gear, being a cold sleeper. 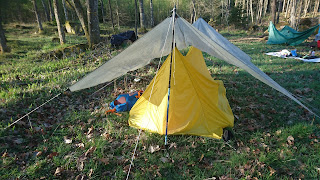 So, I now have my lightweight, condensation free shelter for sheltered areas, just like I had hoped.

What was the downside then? Well, it is of course no shelter for exposed areas, where the wind can pick up speed and trash it. But winds of that caliber we had not. And if we'd encountered them I would have erected my little tent deep among the trees. And I will not use it above timberline, at least not if there is a risk of hard winds.

It is also pretty complicated to pitch. Not something I would like to do in a strong wind, but then that should hardly be necessary. It demands that you are used to pitching a rectangular tarp with no frills, using only lines, pegs and walking poles. This takes a bit of knowledge and a bit of time compared to for instance setting up my MLD Trailstar.
Do it yourself Shelters
Jörgen Johansson
I have been hiking since my early teens, mostly solo. Right after the millenium I discovered ultra light backpacking and have been using, trying and adapting originally American techniques to Scandinavian tundra. The demands in that area are demanding and equal to the ones I have found in northern Alaska. About this I have written in a number of books. In Swedish the bestselling Vandra Fjäderlätt, in English the Smarter Backpacking series that you find on Amazon.