By Jörgen Johansson August 31, 2014
Here you will find some reflections on stove and shoes used during my 500 km summer hike, travelling solo through the Artic National Wildlife Refuge in Brooks Range, Alaska. More about the background here, brief trip reports here and gear reflections on the three big ones here. 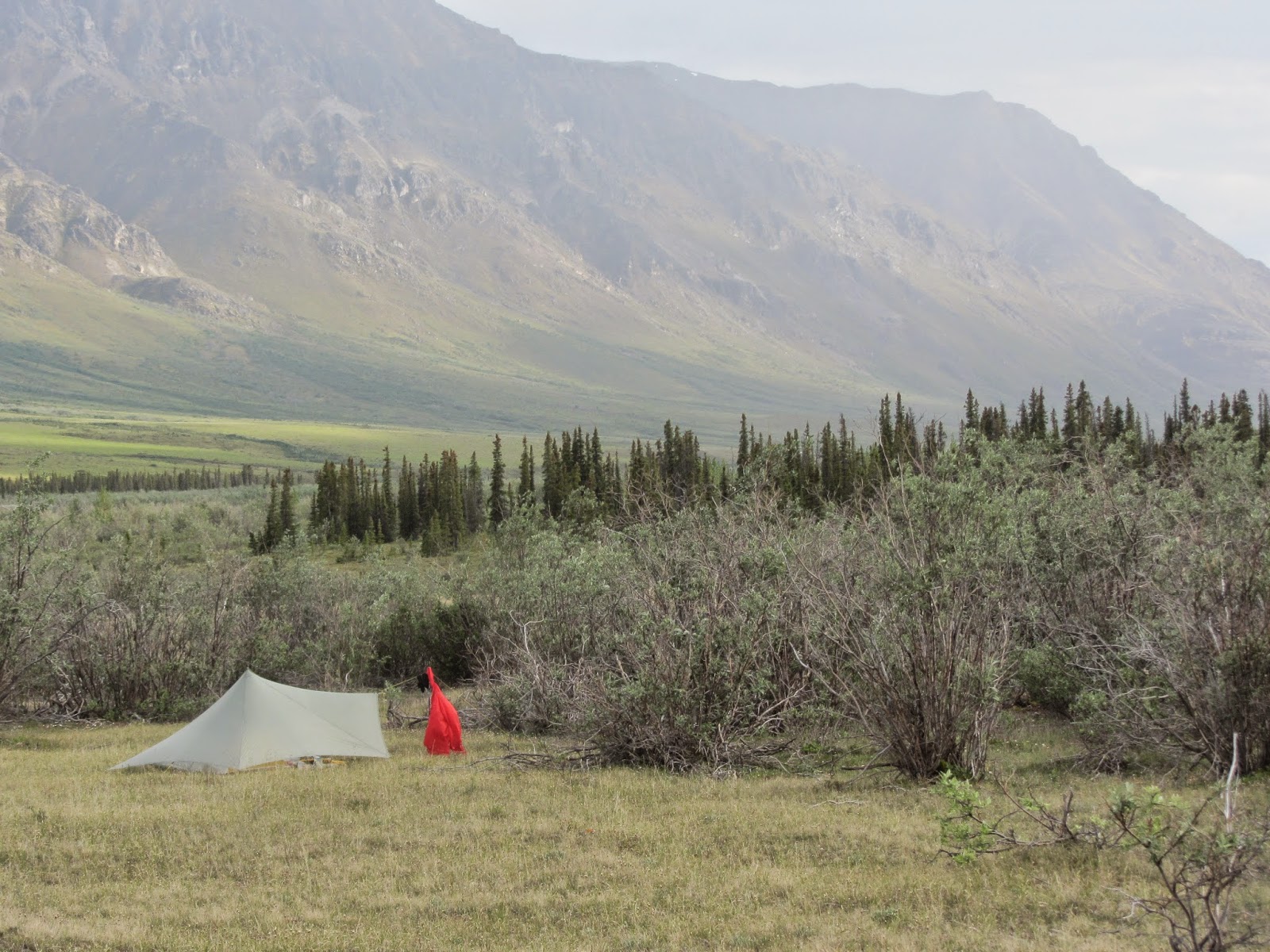 Stove - Primus Eta Lite
I got this stove from Primus to test for Coast2Coast Sweden 2014 and it worked so well that I decided to bring it to Alaska. This is one of the few pieces of gear brought to Alaska that I did not pay for myself, just so you know. 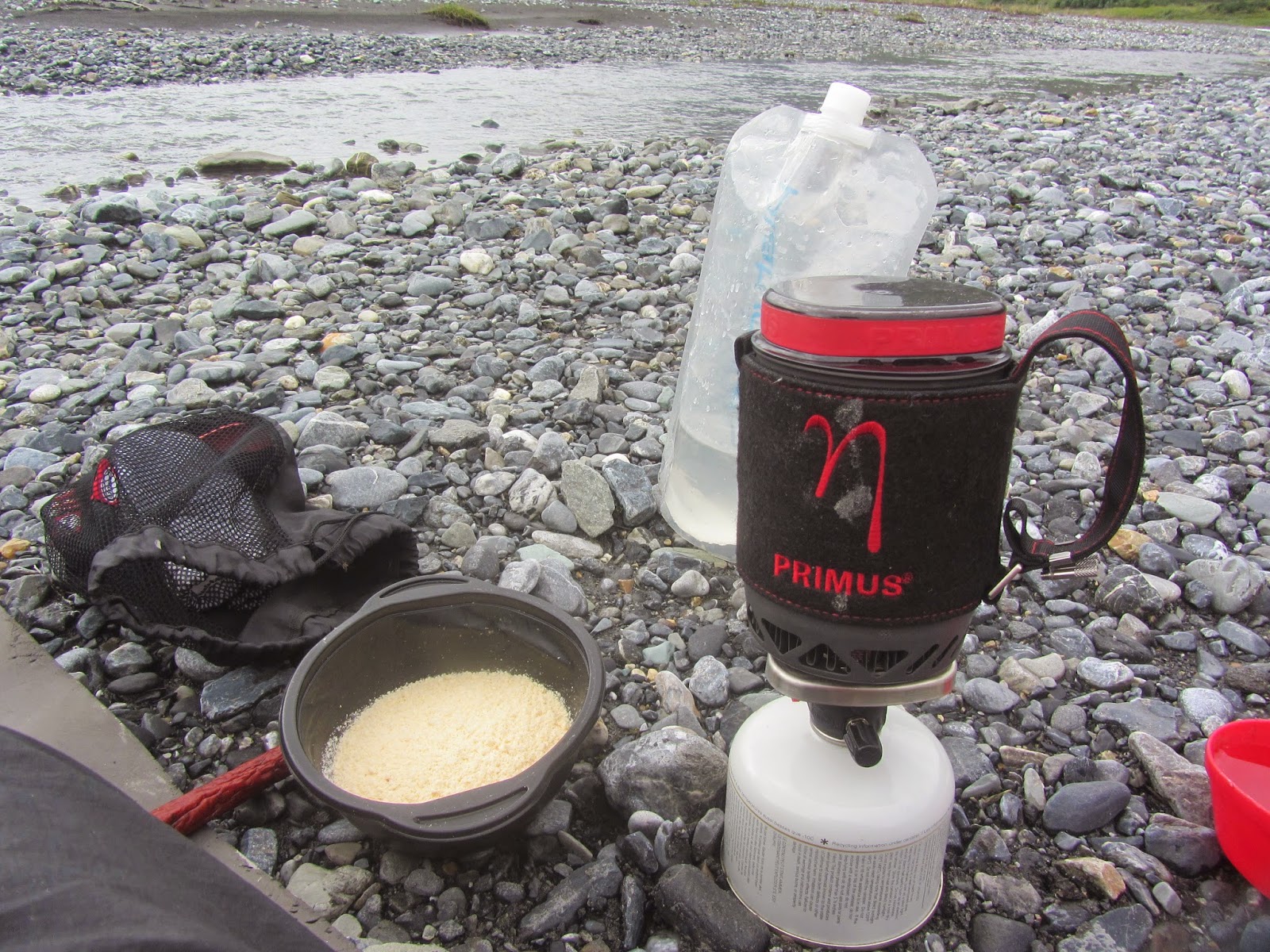 The ETA Lite does look quite a bit like a Jet boil. The burner with a Piezo igniter twists onto the bottom of the pot with the heat exchanger, which also protects the flame against drafts to a certain extent. The pot is covered with a felt like material that is easy to remove, there is simply a strip of Velcro along the vertical. There is a surprisingly sturdy strap that is supposed to be used as a handle. It also supposedly goes over the top, securing the lid/cup in place. 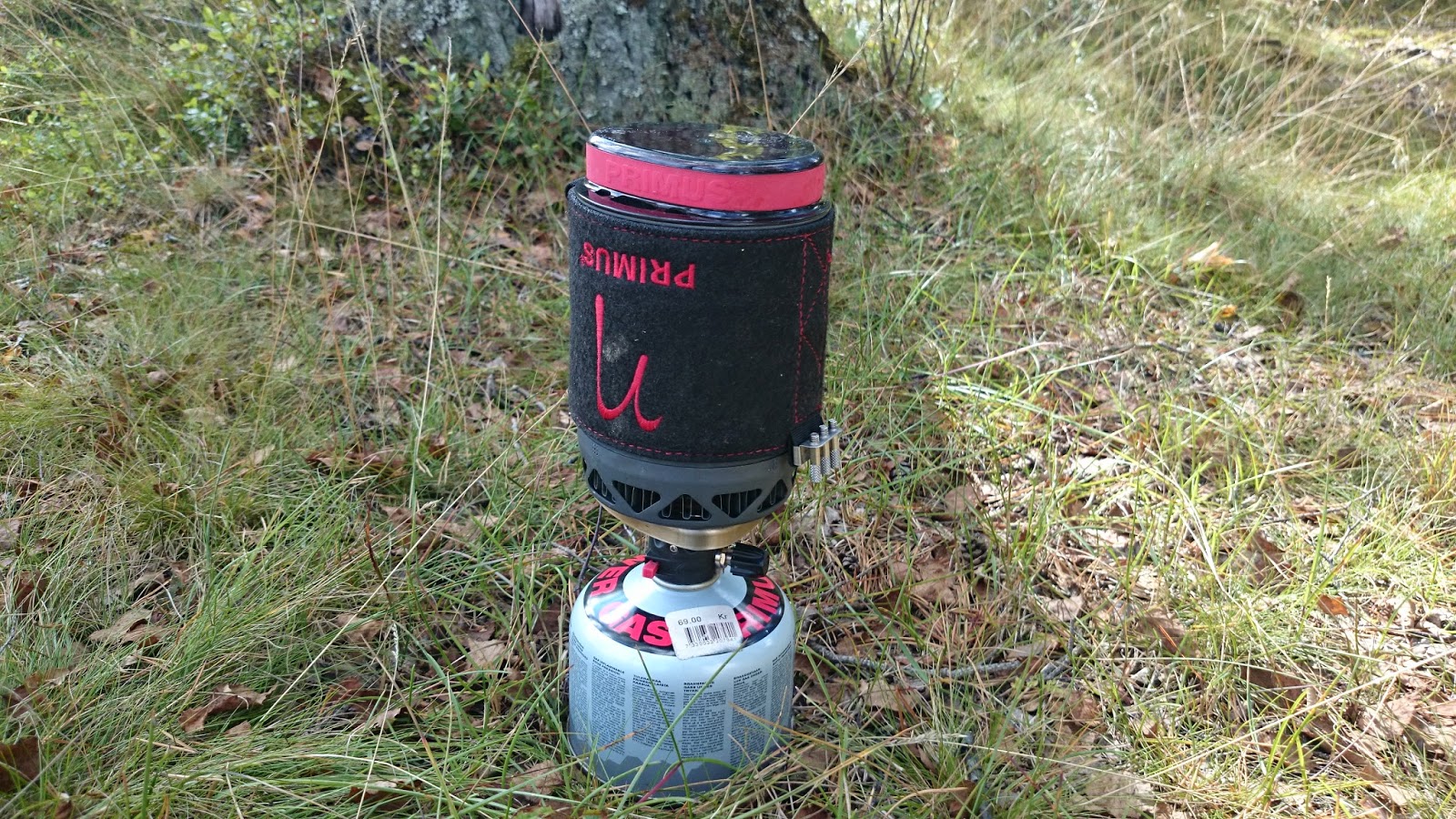 Here you can see the modifications I have done since Brooks Range. The "handle" was simply unnecessary, it is much easier to just grip the pot around the felt lining, it insulates well enough and your fingers won't burn. Pouring like that is also done with much more precision than using the jingly handle. 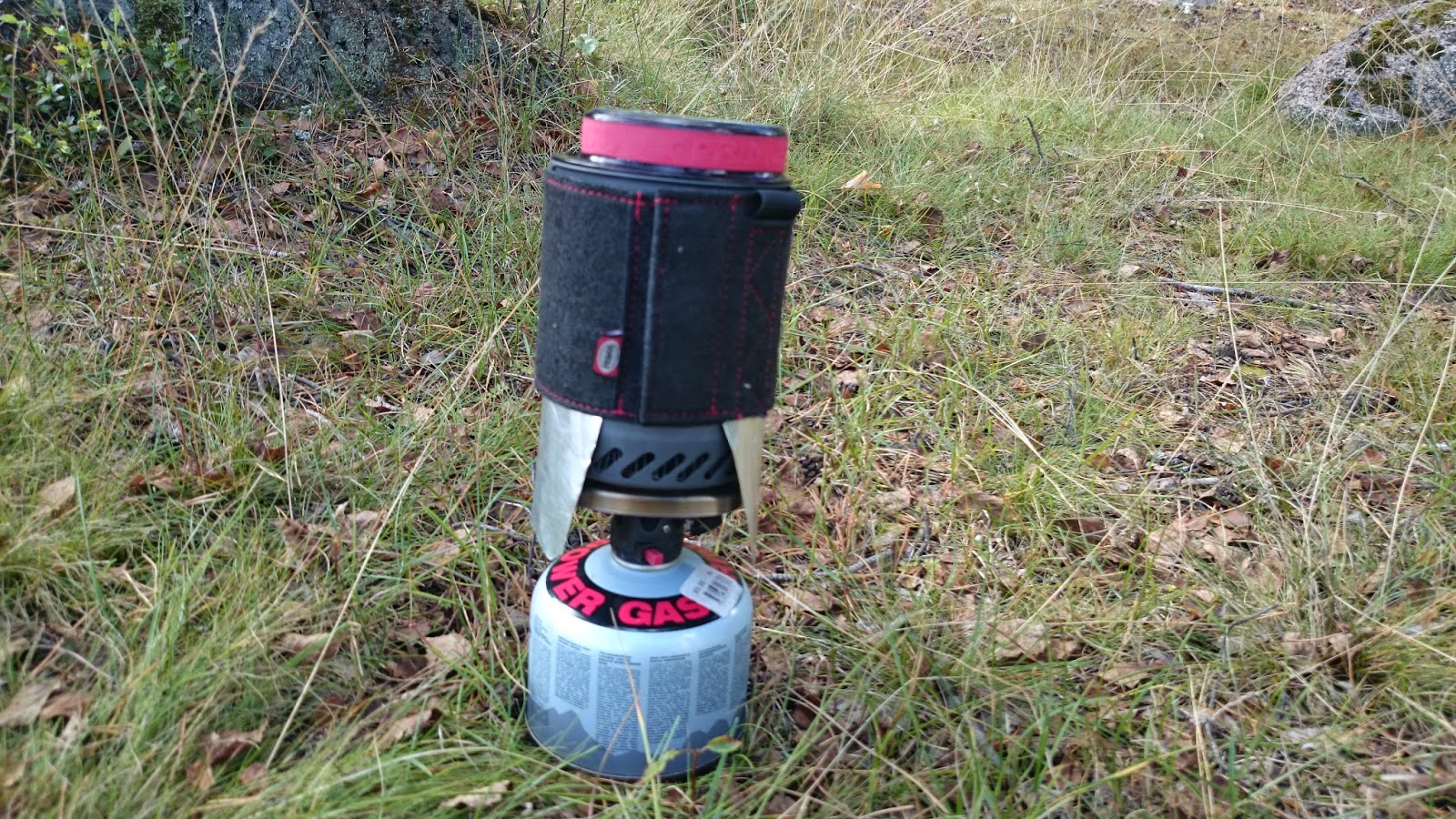 Above you can see that I have added a piece of stiff aluminium as wind shield. This is needed if the wind picks up a bit. Most likely it is not sanctioned by Primus, since I have a hunch that they, like most companies in the business are afraid of law-suits (particularly in the US), should a canister overheat and explode. Something, that from the test Roger Caffin at Backpackinglight.com has determined, really takes some doing. But the old recommendation stands, if the canister is getting to hot to touch with your hand, increase ventilation around it or shut off the burner.


The neat thing is how easy it is to rig the wind shield with the felt lining and the Velcro exactly were you want it. And even neater is how easy it is to transport the windshield between the liner and the pot, as seen below. You will not notice it until you need it. My aluminum piece weighs 7 grams, the entire set 400 grams excluding canister. If you want to skip the rather sturdy lid that also doubles as a cup you are down to 350 grams. 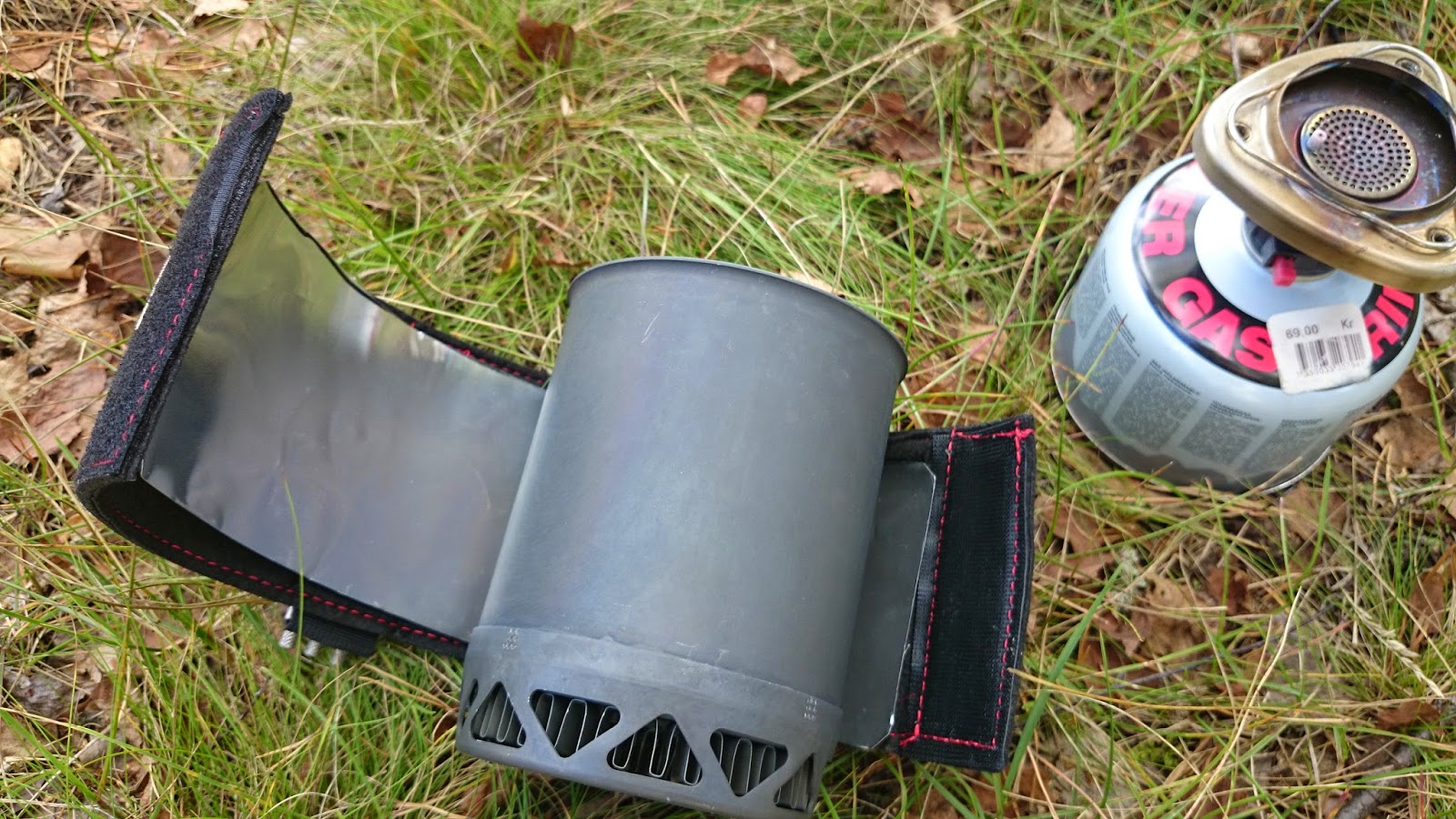 Not the lightest topmounted canister stove with an heat exchanger on the market, it is about 100 grams heavier than the Jetboil SOL-TI, both with pots at 0,8 litres (the Primus pot has gradings to 0,5 liters but will take pretty close to 0,8 if you fill it to the brim). Still I liked it and will probably go on using it.

What did NOT work so well with the Eta Lite was the Piezo igniter. Or igniters, I should say. After 4-5 days on Coast2Coast Sweden it broke. I got a replacement from Primus for Brooks Range. It also broke, or at least stopped igniting, after 4-5 days. Piezos are very convenient, but I have had a number of them break on me so I always carry plenty of backup.

Footwear - Salomon Tech Amphibs
My favourite footwear for almost all types of terrain since 10 year worked as planned in the Brooks Range. In fact, they felt like the ideal compromise for this trip and since all footwear will be compromises, they all have their strong and weak points, this is fine with me. 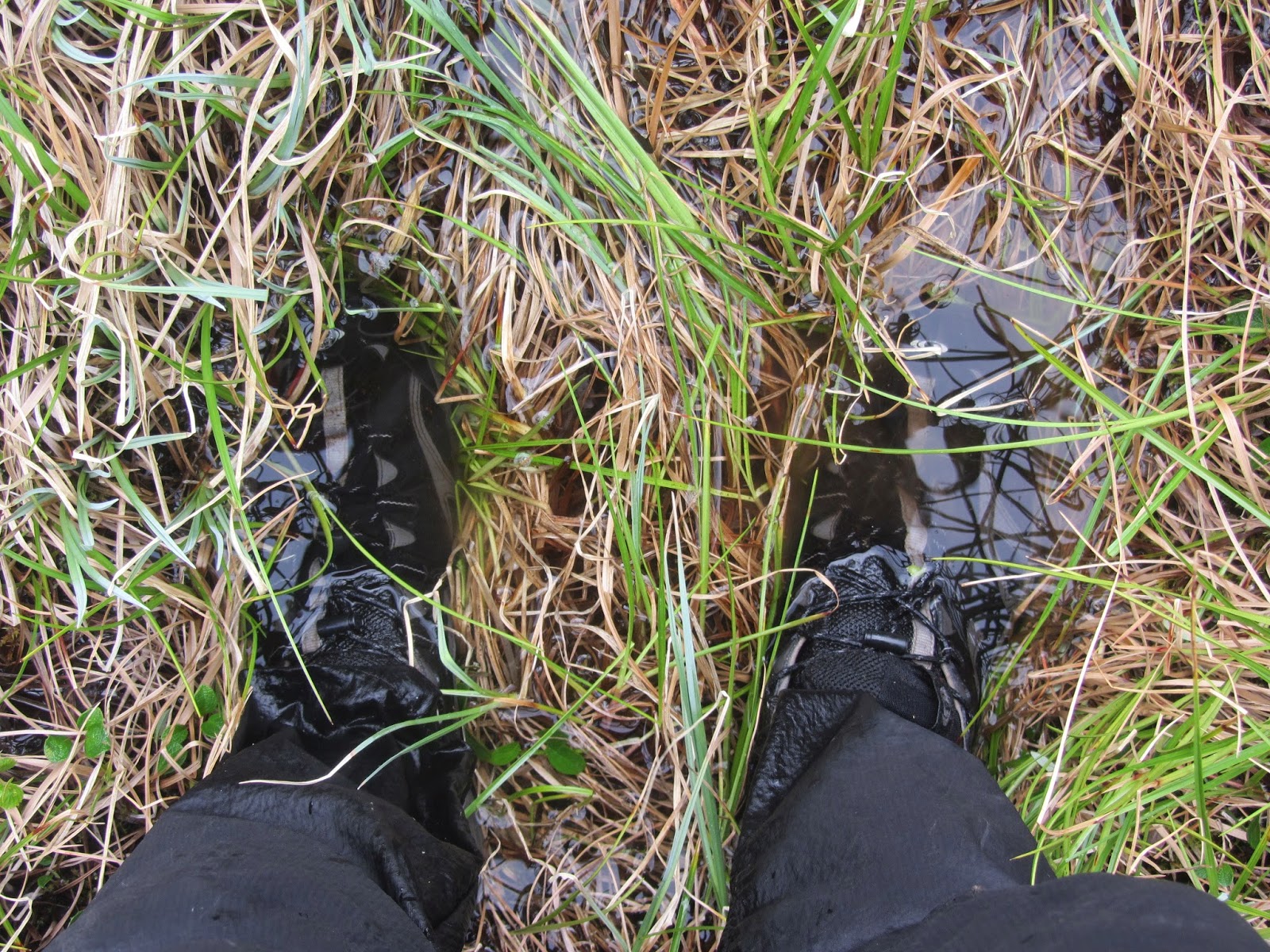 The part of Brooks Range that I covered is pretty wet, due to permafrost. The water sort of has no place to go. Also, following drainages in a mostly westerly direction as I did, I probably forded at least 20-30 times a day. These fords were usually nothing noticable, with mild currents and water not rising above the knee. Well, if I had been wearing boots and having had to remove these every 10-20 minutes, and sometimes more often, these fords would of course not have been only noticable but a major pain in the butt. Now I just keep walking.

In the photo above I am wearing thin nylons socks/stockings, which are my standard. They dry out fast and protects against chafing. If the weather or the water tended to cool my feet to uncomfortable levels I used neopren socks. If this was not enough to maintain a decent foot temperature, I donned my Helly-Hansen pile socks and pulled my Rocky Goretex socks on top. See photo below. In these I walked comfortably for one day in 20 cm of snow, just to take an example. 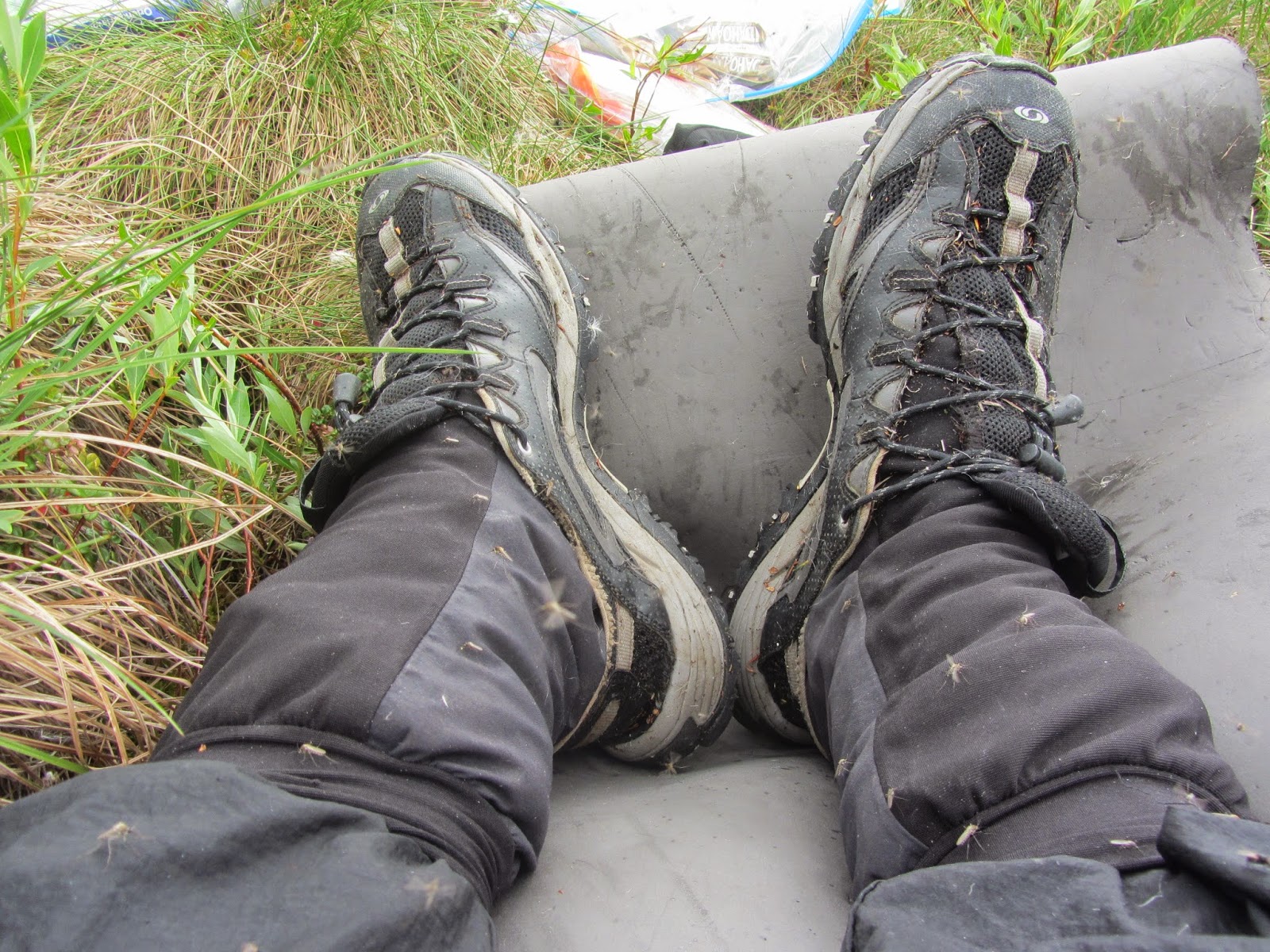 In chilly weather during breaks I donned the pile socks for warmth and mosquito protection, see below. In warmer weather I take of my shoes and socks at each hourly break, giving them a breather. I then usually covered my feet with my rain jacket to stave off the moskers. 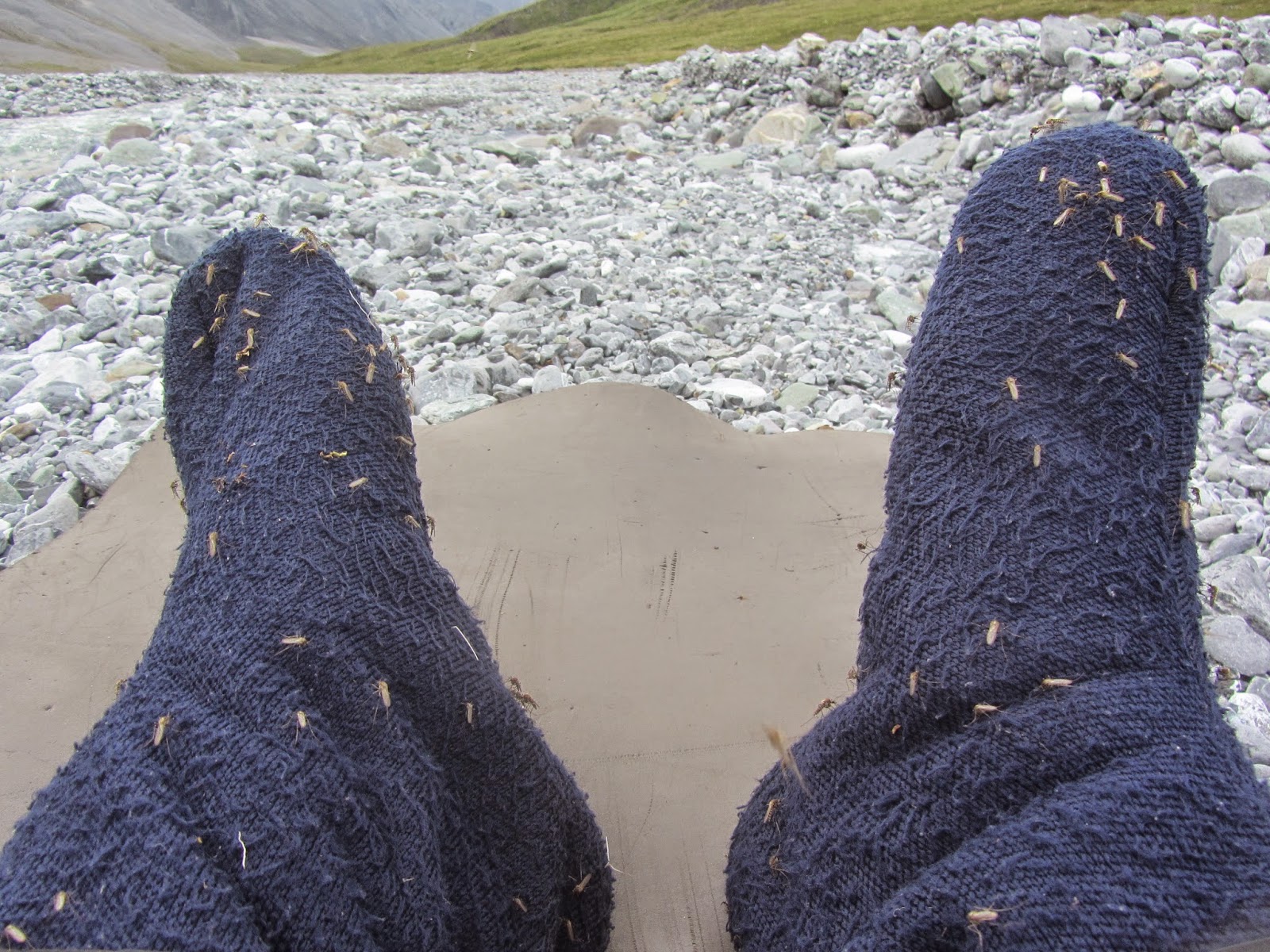 Below you see what the shoes look like today. For much of the trip I used Smartfeet Carbon insoles, which are their lightest insoles (another piece of gear furnished for free by the Swedish agent). After a couple of days I could feel (which I do not think has happened to me before) that some support for my instep would be nice. And since I had brought the insoles I then started using them and they worked fine and I was grateful for them for the rest of the trip. 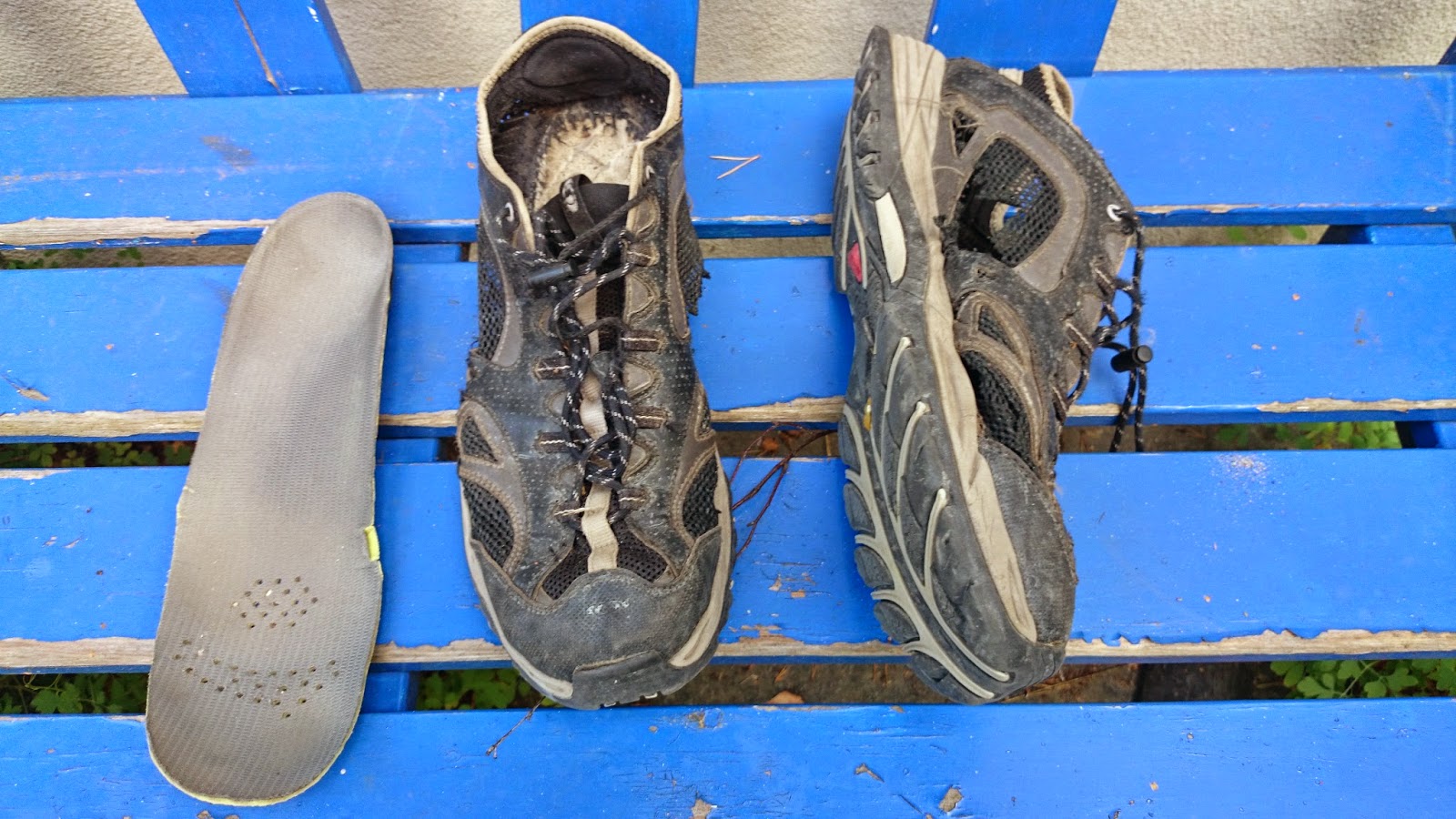 The Salomon Tech Amphibs where not brand new when I left for the Brooks, I do not really know how many miles they had on them. Not new and not old. Now they are of course shot and I will not use them again. However, I will keep them, partly for sentimental reasons and partly to be able to show doubters that you do not necessarily need heavy boots for a 500 K journey through Brooks Range. And if so maybe you do not need heavy boots travelling between huts on Kungsleden either...

What had me a bit worried for a while was how the mesh got cut to rags by sharp rocks and shale in the steep canyons I was negotiating. Compared to open sandals this mesh protects your feet very well and is normally immensely durable. However, my feet never suffered and I never got any cuts in spite of often wearing the thinnest of socks. At times the neopren socks felt like nice protection, though. 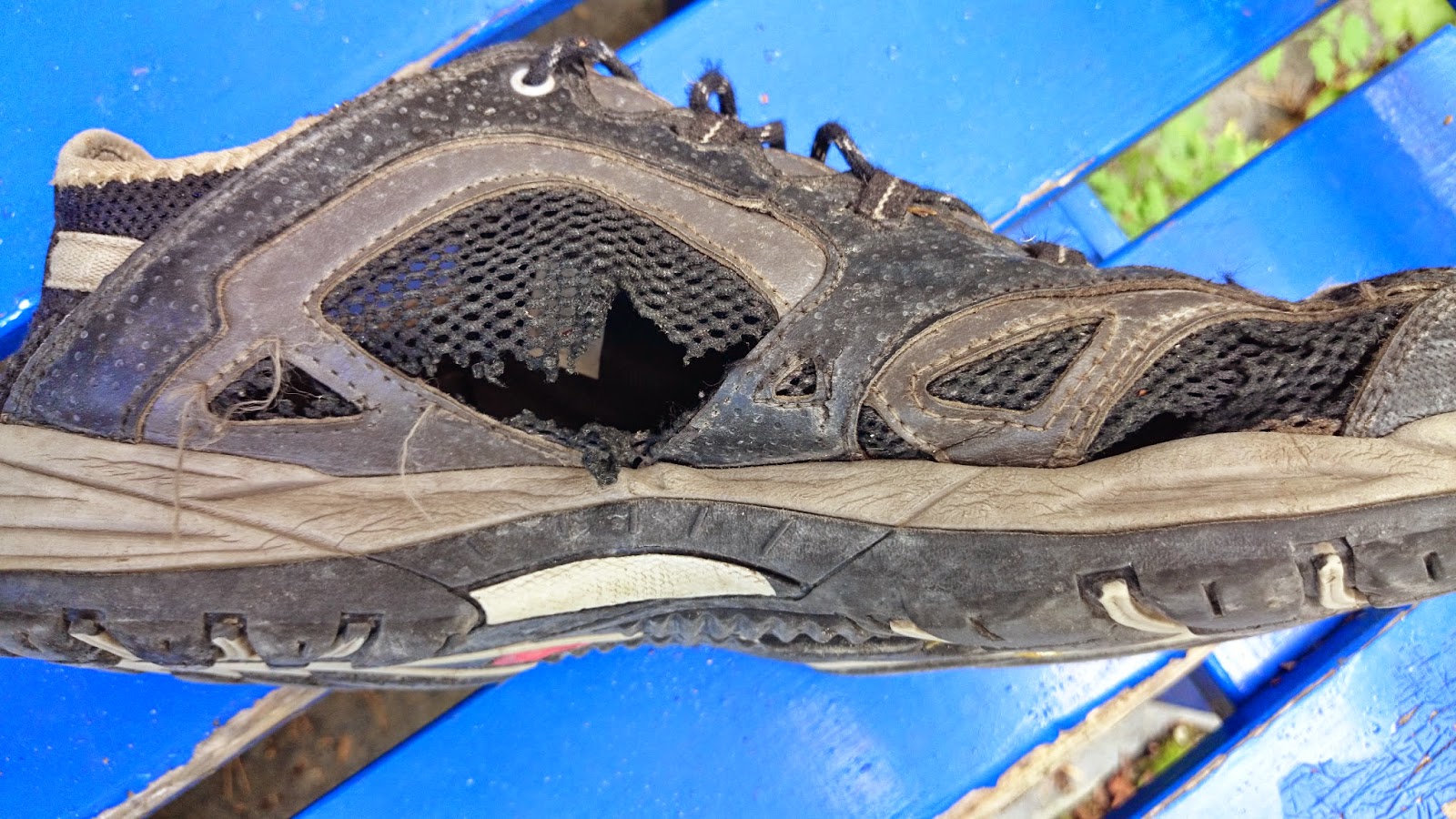 What I was afraid of was that the synthetic straps between the mesh parts would also become abraded, and then the entire structure of the shoe would have been damaged. I might have been able to hold things together with some soft wire that I always bring, but that was never necessary. I am impressed by how these synthetic straps held up.

To sum things up; these shoes and the combination of socks described are still the best I have found and used for long trips in wet tundra country. Travelling cross country as I did is not as hard on my feet as dusty, well-trodden trails and gravel roads. I did not get a single hotspot or blister at any time during my Brooks Range hike. I think this is because I use soft shoes in a terrain that evolution developed my feet for. That is, every step is in many ways unique compared to trail pounding with thousands of identical footsteps on unrelenting ground. 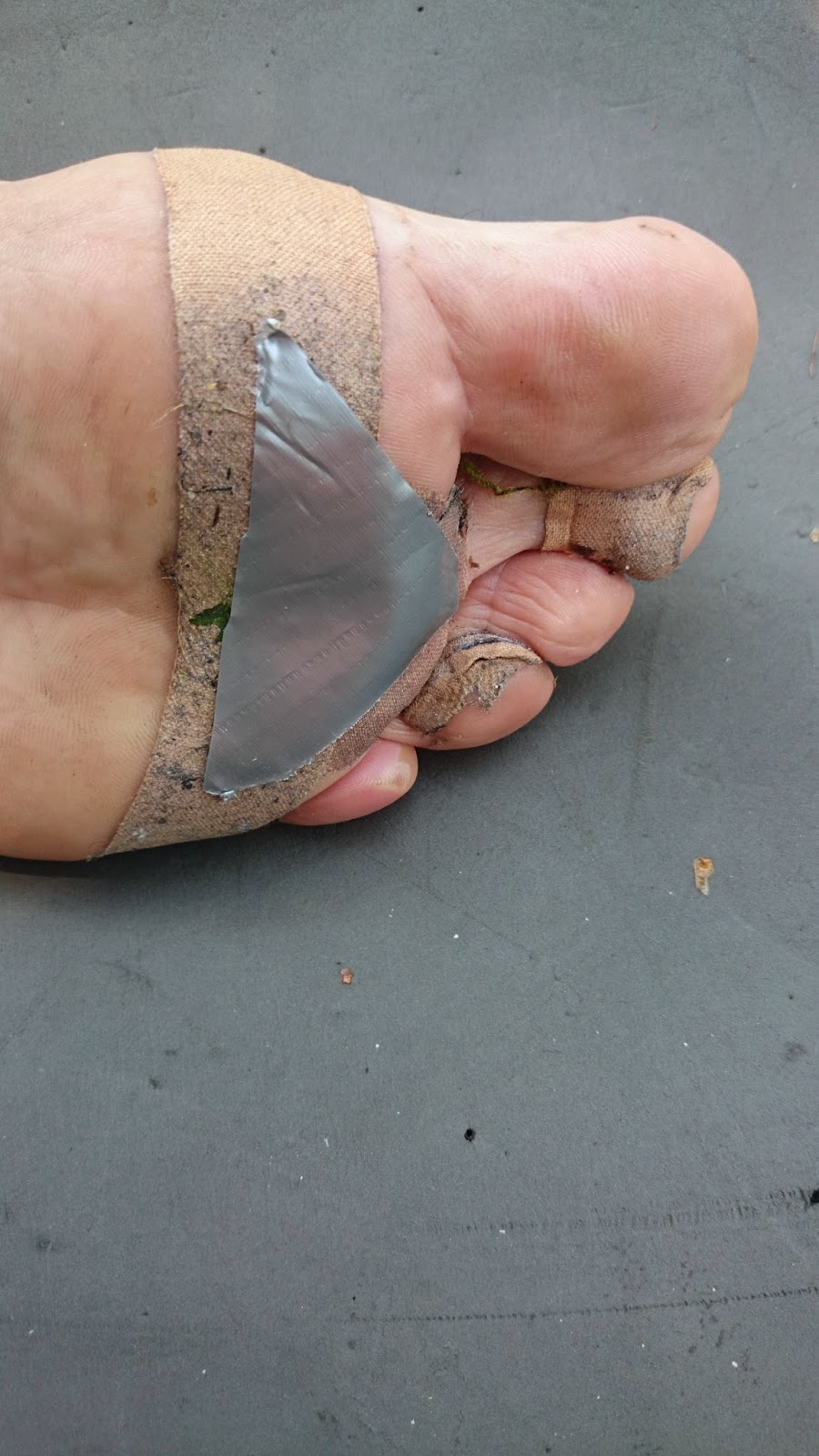 However, for use on hard trails and roads, like I found out while doing Coast2Coast Sweden in 2013, these shoes might not be ideal. They do let dust and fine grit in, and with the thin nylon socks that are ideal for wet country, this grit really gets a chance of abrading the skin of my feet. This year on C2C Sweden I used a pair of less airy shoes (Haglofs Lim Low) and double grit-swallowing socks and also taped my feet well in areas that were prone to blister. I fared 90 percent better than in 2013. So, different solutions for different surfaces seems to be the medicine for me.
Jörgen Johansson
I have been hiking since my early teens, mostly solo. Right after the millenium I discovered ultra light backpacking and have been using, trying and adapting originally American techniques to Scandinavian tundra. The demands in that area are demanding and equal to the ones I have found in northern Alaska. About this I have written in a number of books. In Swedish the bestselling Vandra Fjäderlätt, in English the Smarter Backpacking series that you find on Amazon.