By Jörgen Johansson May 24, 2012
Here is a film with some examples of light gear that I have used and that all contribute a lot to achieving "3 for 3". Probably the most fundamental step anyone can take on the trail to a really light pack. 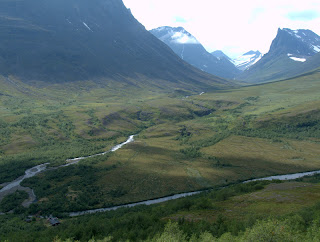 During a long weekend with wonderful weather recently I made a film with my son Daniel, 12 years old. He spends way too much time on Youtube (if you ask his dad) but is trying to convince me that "Youtube is the way to go". Where it will go I am not so sure.

But anyway, we made a film that actually is packed with a lot of content (if you ask dad) with a not so hot presenter (if you ask Daniel).

The film gives a lot of tips on how to shave not grams but kilos from most traditional packs. I have used the 343-formula and simply illustrated it with gear I have used that will work. Although the advice is general the film is especially aimed at people attempting to hike Fjällräven Classic in the Lapland mountains of Sweden this summer. It is sort of a competetion that has managed to get a lot of people to backpack in the mountains for the first time. Unfortunately with packs that are way to heavy for comfort. IMHO anyway.

So I hope to inspire at least some of them to take a look at lighter alternatives for packs, shelters and sleeping gear. The lighter they hike Fjällräven Classic the more likely it is that they will come back to the mountains a second time and maybe even to find that backpacking is the grandest pastime of them all. Me thinks...