By Jörgen Johansson November 14, 2011
I ran into an interesting story about Buck Nelson and his trek along the Brooks Range. Nice inspiration at this time of year. 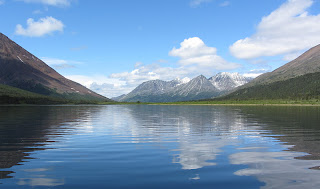 Buck Nelson lives in Fairbanks, Alaska. He is a retired smokejumper who spends a lot of time in the wilderness. Ten years ago he hiked the lenght of the Appalachian Trail and last year he added the Continental Divide Trail to his Triple Crown. In between he had hiked the Pacific Crest Trail, but also done something quite a bit wilder.

In the summer of 2006 he walked  1100 miles (1770 kilometers) across Alaska on his own. He flew into the eastermost part of the Brooks Range, close to the Canadian border and then hiked west until he hit the headwaters of the Noatak River. At the cache there he picked up a rifle, inflated his canoe and made his way to the Bering Strait and Kotzebue before winter set in.

Buck is a lighweight backpacker, probably more or less as ultralight as is safe to be while walking "Alone Across Alaska". Check out his webpage at http://www.bucktrack.com/ and the teaser for his video below. To be recommended.