By Jörgen Johansson August 25, 2011
When the Rock Gardens ended it became even more obvious that the Nahanni had picked up a lot of water from streams and creeks since the Moose Ponds. It was now a wide river that swept me along rapidly, at speeds around 10 km/h. 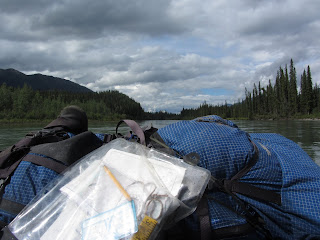 Maps, river guide and solar charger for my cell phone/GPS were from now on steady companions on the 'foredeck'. Contrary to what one might think, being out of the white water did not necessarily mean being able to drift with the current at half-snooze. 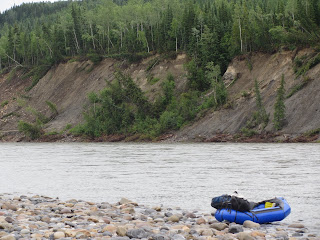 Above is an example of what is callen 'drunken forest'. The Nahanni is continously changing the landscape it travels through, undermining banks and toppling dirt and trees into its flow. The trees are potentially very dangerous for packrafters and not to be neglected by canoeists neither. My packraft has literally bumped into hundreds of rocks, often at high speeds, without showing much wear. It is in fact amazing how tough it is. But the sharp end of an underwater branch of a tree jammed beneath the surface, a ka 'strainer', can rip the paper-thin material of the raft from fore to aft in a second, especially if you hit it at 10 km/h. And if the same sharp branch encounters your thigh in this process, that will not slow this incisor down much. But is sure will slow you down.

Being swept under a drift-pile like the one above, which is where some of the drunken trees end up, is probably the worst nightmare a river traveller can imagine. At least this river traveller. The chances of getting out alive from under such trap are pretty well nil. The powerful current and your belt, clothing and PDF tangled in a myriad of branches under water will probably make your last minutes the least enjoyable minutes you've ever had.

So I kept my eyes well peeled and pointing downstream, to detect the slight ripples or other disturbances in the surface of the moving river that might indicate something under water best avoided. And you bet I gave drift-piles a wide berth. 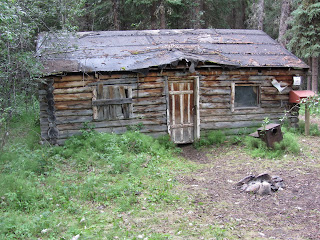 In 1978 a young couple spent their first year of marriage in a cabin by the Nahanni. This honeymoon cabin is now known as Moore's cabin and it was also the first checkpoint for Nahanni National Park Reserve, which I had now entered. Recently enlarged to the size of Belgium, visitors to the Park do need a permit and are encouraged to put their name in check-point ledgers along the route. This ledger was kept in the box at the right hand corner of the cabin.

I had read Joanne Moore's nice book "Nahanni Trailhead", describing her honeymoon year and would have liked to spend more time at the vicinity of the cabin, but the day was late, it was raining and my 'dry-suit' was leaking, so I moved on after taking a stroll around the building and taking some photos. 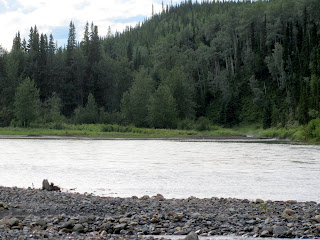 My goal was Moore's Hotsprings a couple of kilometers downriver. The opportunity to soak in a 35 C degree natural hotspring after more than a week in the bush and a chilly afternoon in the rain seemed to make it an ideal place to camp. Reality was less delightful. As mentioned, it rained steadily. But with the hot springs keeping the immediate surroundings at hot house temperatures even in winter, the mosquitous had a hey-day and the herbs were thigh high with sturdy and woody stems and no hint of a spot open for a tent or a tarp. I found a muddy hole with hot water that proved I was indeed at the hot springs and did not linger, which in retrospect might have been wise. Later I heard from other river travellers that they had thought the hotsprings a nice place.  I guess they were there when the sun was shining or were simply in a better mood. Beauty is ever in the eye of the beholder

Instead I ferried across the river to a nice camp-able gravel bar with considerably fewer moskers and pitched my tarp for cooking. In the photo above there is a hint of steam at the opposite bank, where a small creek is seen to run into the Nahanni. That is where water from the hot springs enter the river. 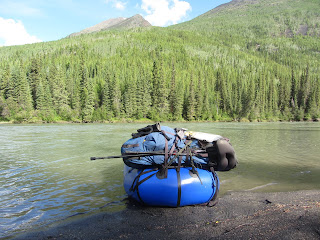 The rain stopped during the night and a wonderful morning was unfolding in front of me. From the start it felt like a great day, and so it turned out. What more could a man ask? I was in a wilderness, the size of which would stagger most people, including myself. Yesterday I had passed Corner Rapids (class II), a rather long stretch of choppy waves of moderate size and with hardly any rocks. It would not normally have bothered me, but now it was slightly unpleasant, although there were no incidents whatsoever. So I had no more whitewater to worry about until below Virginia Falls. Then I would hit Fourth canyon, a long stretch of class II/III with high standing waves for 4-5 kilometers. I did not look forward to that, but right now the sun was shining and white-water nerves could rest for a while. 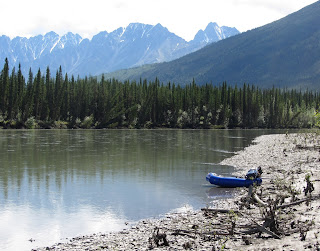 Many fantastic views and things, big and small, were to be found along the big wilderness river that was now my highway, sweeping me along at a brisk pace. The Ragged Range, a bunch of massive granite peaks, would be the next mountain range the river passed through. They soon dominated my the horizon and this continued for the rest of the day. Lunch was on a sun-baked gravel bar in the nude, all my wet gear drying on the rocks around me. Mashed potatoes and 'beer' sausage was on the menu. 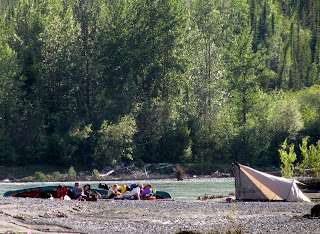 Around 6 pm, when I had begun looking for a suitable campsuite, I ran across my friends the Limey's. While stopping to exchange a few words I was faced with an ultimatum: Would you like to have dinner with us? It is ready NOW.

Never one to walk away from a free meal, the decision was easy to make. So in a minute or two I had a stainless bowl the size of a wash basin in front of me. It contained a meal which I barely managed to internalize without bursting at the seams, but as a guest you have to do your best imitation of Homer Simpson, and I did. It was not particulary painful. 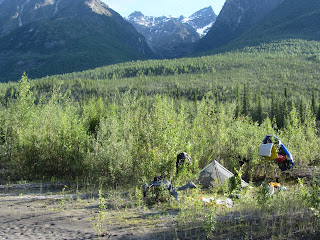 Afterwards I pitched my own tent in the vicinity, looked at some wolf and bear tracks in the sand together with my hosts and, never one to walk away from a free drink, had some whisky and port in their big 'community' bug tent. Wilderness life sure ain't easy, but someone's gotta do it. 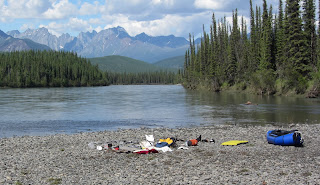 Another fine day on the river followed. This day as well a gravel bar, nice and hot in the sun, offered a great place to stop for lunch. I dried my gear as usual and enjoyed the marvelous view of the Ragged Range upstream. 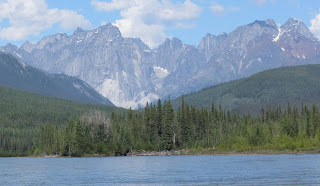 'The Cirque of the Unclimbables' is an out of the way version of the big walls in Yosemite. The name of one of the peaks, Lotus Flower Tower, indicates that it was named neither by natives nor by early white explorers, but by climbers. It is in the 'definite' guidebook "50 classic climbs of North America" and has been called "one of the most aesthetically beautiful rock faces in the world". 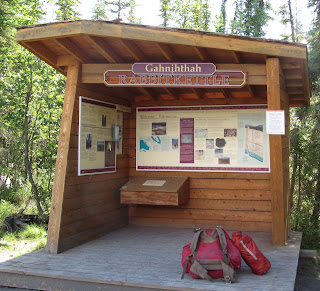 A couple of hours after lunch the sparkling conveyor belt I was riding on brought me in touch with the man-made world again. At Rabbitkettle I was to find the first of two manned Parks Canada warden stations along the Nahanni. A check-in kiosk by the river with a trail leading to Rabbitkettle Lake and the wardens hut 1 kilometer away greeted me. In spite of free whisky and port picked up along the way my supplies were now running low and I was looking forward to collecting my box of supplies at the warden station cache, with food for another eight days of travel.
Jörgen Johansson
I have been hiking since my early teens, mostly solo. Right after the millenium I discovered ultra light backpacking and have been using, trying and adapting originally American techniques to Scandinavian tundra. The demands in that area are demanding and equal to the ones I have found in northern Alaska. About this I have written in a number of books. In Swedish the bestselling Vandra Fjäderlätt, in English the Smarter Backpacking series that you find on Amazon.