Tarptent Aeon Li in hard wind and rain on the tundra

By Jörgen Johansson August 25, 2017
In August 2021 I walked Lapplandsleden, a new trail in Swedish Lapland, 190 kilometers from Hemavan to Borgafjäll. The tent I used was a slightly modified, older model of Tarptent Aeon Li and my last night out I ran into high winds and rain on the tundra. This is about how the tent performed. 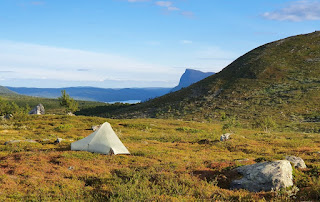 The Aeon Li that I was using was bought in the US in 2019. I had used it for a total of around 50 nights along the Colorado Trail in 2019 and the Swedish Green Ribbon in 2020. The current 2021 model from Tarptent is modified in ways that will most likely improve its performance for the kind of weather I ran into.

One thing I noticed and did not like about the Aeon Li when I first got it (and have noticed on some other American lightweight tents) was that the lines were short and tended to attach to the pegs in an angle not ideal for maximum holding strenght. 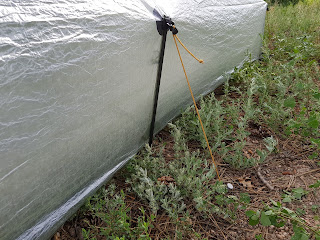 Above you see that the carbon strut placed halfway between the rear corners of the tent has a very steep angle towards the peg, tending to pull the peg more upwards than sideways. For maximum strenght a tent line should attach to the peg at approximately right angles and the peg should only have a slight incline when pressed into the ground.

This construction is likely not much of a problem if you always camp in protected forest areas, which in my experience is what most American hikers frequent and the tents constructed for. In open windy areas like desert and tundra this steep angle will be a weakness.

It was easy for me in 2019 to replace the line pictured above with one that was approximately 1 meter/3 feet long and thereby solve the problem.

More complicated to solve were the angle of the lines anchoring the corner struts pictured below.

These struts do a lot for improved ventilation and space inside a tent, something hugely appreciated by me being 190 centimeters tall. However the peg going into the ground is run through a ring that will only fit a small diameter peg and also attached to a fairly complex set of strings and elastics. So just replacing the yellow line with a longer was not an option here. So I left it, decided to give it some thought another time. And did not...

During my two month hike along the Green Ribbon in 2020 I used the Aeon Li for the first month and my MLD Trailstar for the second, northern half. One reason was that I ran into a night with hard winds and rain during the first month. The wind exposed corner of the Aeon Li shown above was ripped out of the ground in the middle of the night and I had the usual cheerful experience of getting out into the wind and rain and try to fix things. It worked out pretty well, there were a suitable number of suitably sized rocks around. So I put one in the triangle inside the peg and strings on the offending corner of the tent (and on all other pegs as well) and it held up well during the night.

What was less good was that my old model Aion Li did not have a zipper closing the foretent, but only a couple of lenghts of Velcro. That was  not enough to hold up in the high winds battering the tent and the opening was flapping and letting in rain all night.

This last winter I replaced the Velcro with a zipper on my tent and also noticed that Tarptent had done the same with their new model of Aion Li.

Returning to my recent hike, my last evening on Lapplandsleden was a perfect end to a nice hike. I enjoyed a warm and bugfree evening outside my tent and enjoyed the views, especially the mighty 700 meter cliff of Borgahällan seen in the distance. 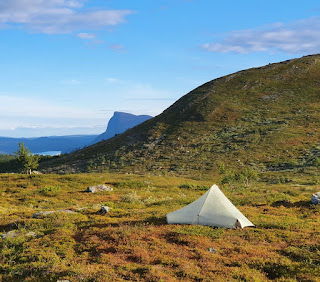 Around midnight the wind picked up considerably and it did not take long for the wind exposed corner peg to come loose. Fortunately it was not raining when I scampered around in the August semi darkness, trying to find suitable rocks. This time it was not so easy, but I finally managed to anchor the most exposed corner. It held for the rest of the night.

Towards dawn the rain started, whipped by the strong winds. This was a day of torrential rains in the northern part of Sweden and the city of Gävle, further south, was flooded. Up were I was trying to sleep it was fortunately not that bad. Still, the wind pushed the shelter mercilessly and the sleeping area was diminished by the bulging ceiling of the tent. Towards morning the wind seemed rather to increase than decrease, so I had some cereals before packing up and took off, coming into the relative protection of the birch forest about an hour later. Fortunately I had only a half days walk in the pouring rain before coming to the village of Borgafjäll.

In the above photo you can see how Tarptent has improved the corners that have been a weak link in the Aeon Li construction. This is a current photo from their website. I will probably do something similar with my tent. I still think that the yellow line is a bit short (look at the angle with the peg) but that is easily fixed with longer lines and the same basic construction.

My conclusions are that the Tarptent Aion Li can stand up to high winds in exposed areas, with the improvements mentioned. I prefer the meteorological definition of "storm", being winds exceeding 24,5 meters/second (89 kilometers per hour) that can uproot trees, cause damage to houses and throw a grown person to the ground. In my opinion the word "storm" is used rather carelessly among many hikers. Few, if any, has carried a wind meter in the "storms" they talk and write about. Do not let facts ruin a good story! The winds during the two nights mentioned above were most likely not storm strenght, but hard winds around 20 meters/second. Based on my own experiences and no wind meter ;-)

However, I have spent many hundreds of nights in the Swedish mountains and have not so far encountered what I would think is storm, but a quite a number of nights with high winds. This is for three season hiking. In winter I have experienced what I believe is "storm" and my impression is that winds over here are more ferocious in winter than in summer. Winter storms are of course also much more dangerous because of low temperatures and very limited visibility, which on occassion leaves people dead on the mountain.

So my opinion is that the 2021 version of Tarptent Aeon Li will manage well even in bad weather in the Swedish mountains. It is not indestructible (which tents are?) but the low weight of 500 grams is a very nice argument. It did not leak during the nights I have described. However, if I expect REALLY high winds and rain I will chose my MLD Trailstar, which I deem to be as bomb proof as any other 3-season tent  (due to the fact that you can change the configuration and lower the center pole a lot, giving you a not very comfortable but safe haven). But my combo of Trailstar outer and home made inner tent weights 900 grams. So it is always a bit of a ... decision, whether to take the Aeon Li or the Trailstar.