By Jörgen Johansson June 29, 2016
It happens sooner or later, to us all. That the time will come to retire some of our most favorite gear. Now the time has come for my Hyperlite Mountain Gear Porter Pack 4400. I will take this opportunity to show what a big, lightweigth pack can look like like after some thousands of kilometers. And discuss some of the pros and cons of lightweight packs.

The photo above shows my pack on its maiden voyage, through Sarek National Park in September 2013. Bright white and shining, the pack and the accompanying MLD Trailstar tent were being tested for my upcoming trip to Alaska's Brooks Range in 2014.

The Porter Pack performed well in Brooks Range, both in 2014 and 2015. It was also on my back on the John Muir Trail and other parts of the High Sierra for three week trips in 2015, 2016 and 2017. It has seen what lies along the trail of Coast2Coast Sweden as well as several trips north of the Arctic Circle in Sweden and Norway. It has bushwhacked with me in Canada's Northwest Territories as well as in the Canadian Rockies. Since February 2019 it has been on my back almost daily, travelling around the world, which includes hiking in the desert of Utah and along 1000 km of the Bibbulmun Track in Australia,  as well as being my carry on luggage for the several months in between. Now, in the summer of 2019 the pack is six years old and has travelled about 3600 kilometers on longer trips and for an unknown distance on numerous shorter outings.

Some facts: My HMG Porter Pack 4400, including a homemade back pocket (seen on first photo above, next to the sleeping pad) weighs 1060 grams and holds 4400 cuin/70 liters. It has a roll top closure and a compression system consisting of three parallell straps on each of the two side panels. It has aluminum stays in the back to provide stability, a padded waist belt and padded shoulder straps sewn on to the pack. No adjustments in back length possible, but the pack comes in different sizes, mine is a Large. It is made of a proprietary fabric of HMGs, a combination of Cuben/Dyneema Composite Fibre (DCF) and polyester.

The weight of the 4400 is not very much more than that of HMGs smaller packs, like the 2400 or 3400. The 4400 can hold and carry big loads when necessary, but also has a very good compression system (not all pack compression systems are IMHO worth the strings they are made of). Compressed, without my hiking gear, I used it for several months as carry on luggage while travelling in the South Pacific.

It is one of the few really big but also lightweight packs on the market. Most traditional packs this size will weigh around 3 kilos. For this reason it is interesting to discuss how well a pack like this jas worn during the years I have used it. It is usually said, and usually true, that lightweight gear wears out faster than "traditional". This is often used as an argument against lightweigth gear. However, my opinion is that this argument is a lot weaker than most people seem to realise.

If the most important thing about a pack, or any gear, is that it should last long enough to be inherited by our children and found in mint condition in a landfill 2000 years from now, we should probably make it from stainless steel or titanium. My belief is that most hikers never wear out much of their gear, be it lightweight or heavy weight. The reason being that most people will not have enough spare time to hike more than a couple of weeks every year, which normally does not really put a lot of strain on the gear.
My opinion about lightweight gear, which I have repeated over and over in my books, is that I use the lightest gear that does the job and that it does not have to last 30-40 years. I am happy with 5-10 years. And most of us do not wait until our packs and tents are worn out before buying new ones. We buy new gear because something we believe to be better, not necessary lighter but usually sexier, has caught our attention. Which does not make us very environmentally responsible, but that is another discussion.

Let me also point out that 'the lightest gear that does the job' means that a lightweight rain jacket that leaks is not doing the job, so I will not use it. Nor will I use a tent that is shredded above timberline. And so on. This mentioned because many people who for some reason do not like ligthweight gear (the reasons summarized by two words, conservatism and commercialism, in this article I wrote for Backpackinglight.com) often claim that 'it does not work', usually without having tried it themselves.

Let us move from this to my Porter Pack. How does it look today?

All of the different wears and tears shown above is to me no big deal. They have not damaged the function of the pack in any way during the years I have used it, with the exception of the waist belt. I am OK with the fact that the pack looks like it does after 6 years and 3600 kilometers. Other people might have a different opinion.

The pack has of course never been water-proof, no matter what the producer says. I find it no more or no less water resistant than any other pack I have used. Some packs as well as large numbers of stuff sacks might be water proof in the store, the question is usually for how long that will remain when you start using them. I always pack the gear I need to keep dry in sturdy, not ultralight, dry bags. In the wet and boggy Artic, where I do most of my hiking, that is 'the lightest gear that does the job'. In other parts of the world with a more benign climate other decisions might be made.

The main reason I am retiring the pack is the condition of the waist belt. In combination with the general wear and tear this made me decide to pension off my old friend. It has after all been on my back during some of the highest highs and lowest lows of my backpacking life.

Another important reason, in fact very important, is that things have changed. At the time when I bought my Porter Pack from HMG in 2013 the 4400 did not come with side pockets. And for me and most hikers, side pockets are important. It is where I stash my wet tent in the morning and have it ready to hand at night. It is were I keep raingear, snacks and other things that I might need at short notice.

So what pack will replace my old pal? A Hyperlite Mountain Gear 4400 Wind Rider. 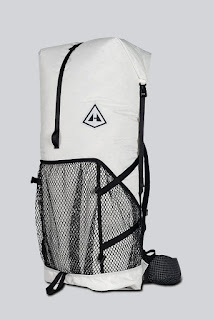 Today in 2019, I can get the big 4400/70 liters with mesh sidepockets, the model is called Wind Rider. I prefer mesh, where I can see my things, to the solid pockets that also can be had, called 4400 Southwest. I do not scramble much among abrasive rocks. I do bushwhack occassionally, but my experience with mesh is that it is a lot more durable than most people think. I can always put sensitive gear inside the pack on occassions like that. My hope is that the compression system, with two straps at the sides, will work as well as the three straps on my old pack. I guess I will find out.