By Jörgen Johansson January 26, 2012
I was spread-eagled in the rotten snow of late May. One of my feet was painfully twisted in the binding, both of my skis solidly stuck in the snow. My hands, still strapped to my ski poles, had been stretched out before me to soften the impact as I fell. My face was buried in the the wet and crumbling snow, large crystals soaking my skin. My pack rested solidly and heavily on the back of my neck, having tumbled forward as I fell without the constriction of a waist belt. My hands found no purchase whatsoever in the crumbling slush.
I was 20 years old. 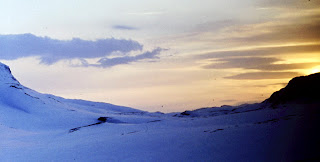 Falling when on skis is not unheard of, for me it is more or less par for the course. This time however, it did not take me long to realise that I was in serious trouble. My feet and legs were lodged and could not be shifted more than minutely. My head and torso were firmly held in place by the full weight of my pack, which was not so light in those days.

All of this would of course have been no problem  if it had not been for the fact that no purchase was to be gotten for my hands in the deep, rotten-to-the-core snow. But my increasingly frenzied grappling found nothing but infinitely yielding snow, which I suspected was at least two meters deep in this slight hollow high in the mountains and two days travel from the last seen habitat of man; a small hut on Lake Katterjaure. 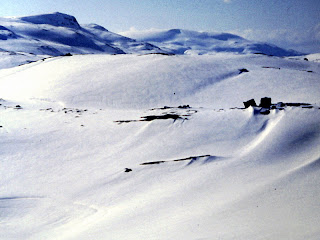 I was on some compensatory leave from the army; combined with a long weekend it would give me a good number of days in the high hills. My army buddies had preferred going home or going partying (not really mutually exclusive) so I was here on my own. I had borrowed some heavy wooden skis with steel edges and a surprisingly modern and lightweight tent at my regiment. The rucksack had been stacked with some freeze dried food, also courtesy of His Majesty, and taking the night train to the border between Sweden and Norway in those days was dirt cheap for anyone doing national service.

The railway from the mines in Kiruna and Gällivare in Sweden had been built in the early 1900s to haul ore to the year around ice free shipping port of Narvik in northern Norway. I had stepped off the night train in the morning two days ago at the Riksgränsen (literally the "National Border"). I took every advantage that a 20 year old soldier could take of the breakfast buffet at the only hotel, Lapplandia, which was mostly catering to the downhill skiers. I think it took the hotel a while to recuperatere from the impact I made among the rich diversity of calories on offer. 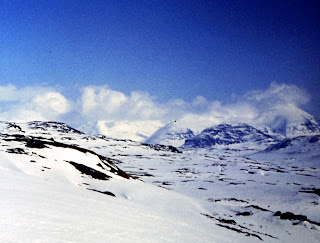 I also found out that I could use the ski lifts for free, since I was using cross country skis, so I took the lift to the top of the ski slope and, instead of going back down the same way as the downhillers were doing, I took of south. Down the less steep backside of the mountain I went and son came to Lake Katterjaure, where a hut belonging to the Swedish Mountaineering Association was located. The weather being nice and sunny, it was late May after all, I encountered a greyhaired gent who was lounging on the porch. We exchanged some courtesies before I continued skiing across the frozen lake. My plan was to follow the border between Sweden and Norway, in a southerly direction and then to cut across the mountains in an easterly direction in the valley of Hoiganvagge. This would in turn bring me into the valley of Abiskovagge where I would hit the famed King's Trail and head north towards Abisko and the railway in order to be back for lineup on Monday morning.
This was my first longer solo trip in the winter mountains of Sweden and as always I was looking for "the road less travelled". However, I was not particulary worried about any safety issues on this trip. Late May almost guarantees that even the nights will not be particulary cold. It being only one month to Midsummer also meant that I had 24 hours of daylight this far north of the Arctic Circle. Under my belt I also had a long, hard winter of Army experience. Being trained as a reconnaisance platoon leader my superiors had deviced a number of up to nine nights outings, almost every week in midwinter. Sometimes in temperatures down to 40 below, although 20 below was the regular fare. So I was young and strong and full of piss and vinegar. However, I had not calculated on swimming around in this, both infinitely yielding and unyielding, mush of soggy ice crystals.
Something I learned the first night out was that ordinary tent pegs where not very useful in this kind of snow. I used skis and poles and hoped there would be little wind. Fortunately the night passed calmly and this was the afternoon of my second day out, somewhere in Hoiganvagge, now going east. I had a great time, skiing at a leisurely pace, taking long breaks and reading Steinbeck's East of Eden in my tent at night. 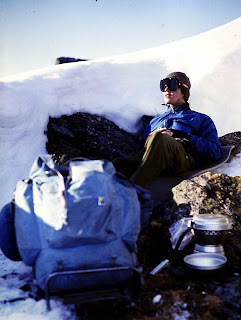 The sun was shining and the temperatures in the day-time were well above freezing, dropping to around zero at night. The only disadvantage really was the fact that this weather was rapidly melting the snow, undermining the surface and making it soft and rotten in places. In other places it was still solidly packed by the winds of winter. Knowing when one or the other would occur was not that easy, it turned out.
As anyone having skied in conditions like this knows,  one second you are gliding along fine on the surface of the snow. Then one or both of your skis on will break through the crust, which is undermined, and you will go down halfway to your knees and somethimes even further. Naturally this puts some stress on your balance, having one or two of your feet solidly anchored while your body core keeps traveling forward at the speed it had before you stepped through the treacherous crust.
This is what had happened to me. Wooden skis and wet snow in combination with poor waxing techniques is nothing that will stimulate a speed junky. But at least going uphill I had a good grip. The brilliant rays from the un were cascading down on a black and white landscape, where the white of the snow was almost visibly being nibbled up by the black of rocks and snowfree patches that were soaking up the sun.
Anyway, going down a slight incline into a bowl in the valley I tried to get as much speed as possible, pushing off with my poles while trying to maintain my body weight equally distributed between the two skis. I had learned that putting too much weight on one ski would force it through the unreliable snow cover, causing stumbles and the occassional fall. This time it did not help, both skis broke through and stopped. I can still remember the feeling of weightlessness flying forward, my hands stretched out before me, towing my skipoles by their straps, before hitting the snow.
Impact was nice and cushioned, like the hug of a friendly octopus. About all I could move was my hands and that did not help at all, with the snow relentlessly swallowing every move I made. Getting the heavy pack off my neck and upper torso would probably do no harm. But how to do that. 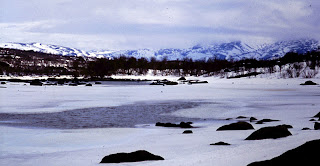 I extricated my hands from the loops in the ski poles. This gave me a chance to start trying to get my arms free from the shoulder straps of my pack. Since I was solidly locked in place this turned out to be impossible with the extremely limited degrees of freedom at my disposal.  It dawned on me that this ridiculous situation that would have made a skiing partner laugh, was no laughing matter for a lone skier miles fromt he beaten track.
Scratching around frantically tryring to find something more solid than snow, like a rock sticking up or anything that could give me purchase, I felt my discarded ski poles. Wait a minute... I pulled the poles closer and gripped them around the middle. Would they sink or would they have enough surface area to be of help?
At first they sank when I put some of my weight on them, but doing so compressed the snow beneath them and their downward progress was arrested. Yes, they made it possible for me to raise my upper body enough to make it anatomically possible to extricate one of my arms from the rucksack and roll it to one side, freeing my face and upper torso. This done the next arm could be wriggled free. 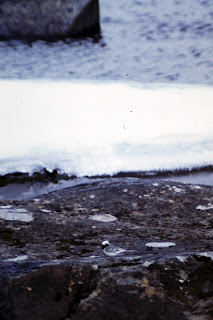 Now I could reach back in order to free my feet from the iron grip of the slushy snow. I released the binding of the ski, but my boot was so twisted it took a while to get it free. After this things went better and soon both my feet were liberated. My glasses where hanging haphazardly across my face, because they had broken over the bridge of my nose at impact, leaving me with two pretty useless monocles. However, it did not take me long to tape them and pretty soon I was on my way again.
Two days later I was doing some heavy lifting of deep and immensely wet and heavy snow that piled up on top of my skis while trudging through the birch forest in the valley of Abiskovagge. Spring truly was in the air, birds were chirping accompanied by the sound of trickling, running and gushing water seemingly everywhere. It conveyed a tremendous feeling of unstoppable, unbreakable Life. 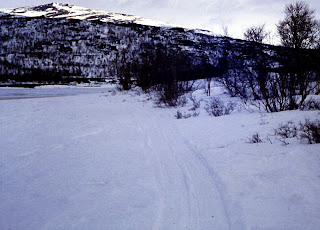 The snow, however, was just a white gesture at this point. I went down deep with each step, in spite of long and wide skis. Extremely slow and heavy going. On one occassion I found myself standing in a creek with water running over my ankles, waist deep in  a whitish substance that was as close to being water as snow can be.
Luckily I came upon a snow-mobile track, skiing on which gave me floatation, if not glide, for the last 10 kilometers to Abisko East. I made it just in time to catch my train and was back at the regiment early the following morning.
Trips