By Jörgen Johansson August 19, 2010
Right now I am more or less desperately trying to make ends meet for my upcoming trip on the last week in August. Top priorities are the making of a new, superultralight cuben tent and a personal flotation device using my water bottles. As I hinted in an earlier posting I am taking my packraft into what is probably the most inaccessible part of the Swedish mountains: I am going west of Virihaure. 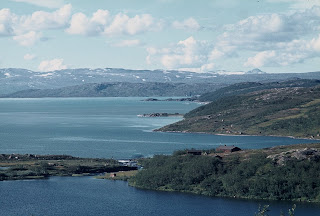 The photo above is from an unforgettable backpacking trip when I was only seventeen and for the first time looked out over what has often been called "the most beautiful lake in Sweden". Virihaure is a big lake in the Laponia Heritage area, Padjelanta NP, close to the border of Norway. The sami summer camp at Staloluokta is seen in the photo and on the eastern shore of Virihaure there are trails and cabins. On the western shore there is nothing, and very often, no one.

The reason for the inaccessability is that Virihaure is part of a chain of some other big lakes and also guarded by some pretty ferocious rivers that have taken the lives of sevaral forders, even among the reindeer keepers in the area. So few people visit west of Virihaure and those that do usually come from Norway or let themselves be ferried over the lake by the Sami.
I have never been west of Virihaure but it struck me about a month ago that thanks to the packraft this area now would be open to a free ranging exploration of the kind that I like. 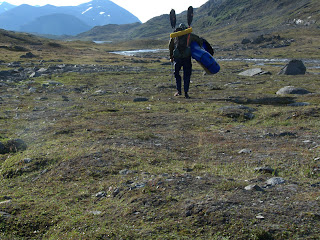 So the plan now is to enter the area from the northeast, at Vaisaluokta and Ritsem on the huge dam of Akkajaure. Then I plan to hike north of Sallohaure, Vastenjaure and down west of Virihaure, aiming for Sulitjelma on the Norwegian side of the border. Known as one of the worlds most peaceful borders. So I am looking forward to paddling beneath the white cliffs of Aralåbå...
But right now I am off to cut some cuben fiber...
Jörgen Johansson
I have been hiking since my early teens, mostly solo. Right after the millenium I discovered ultra light backpacking and have been using, trying and adapting originally American techniques to Scandinavian tundra. The demands in that area are demanding and equal to the ones I have found in northern Alaska. About this I have written in a number of books. In Swedish the bestselling Vandra Fjäderlätt, in English the Smarter Backpacking series that you find on Amazon.